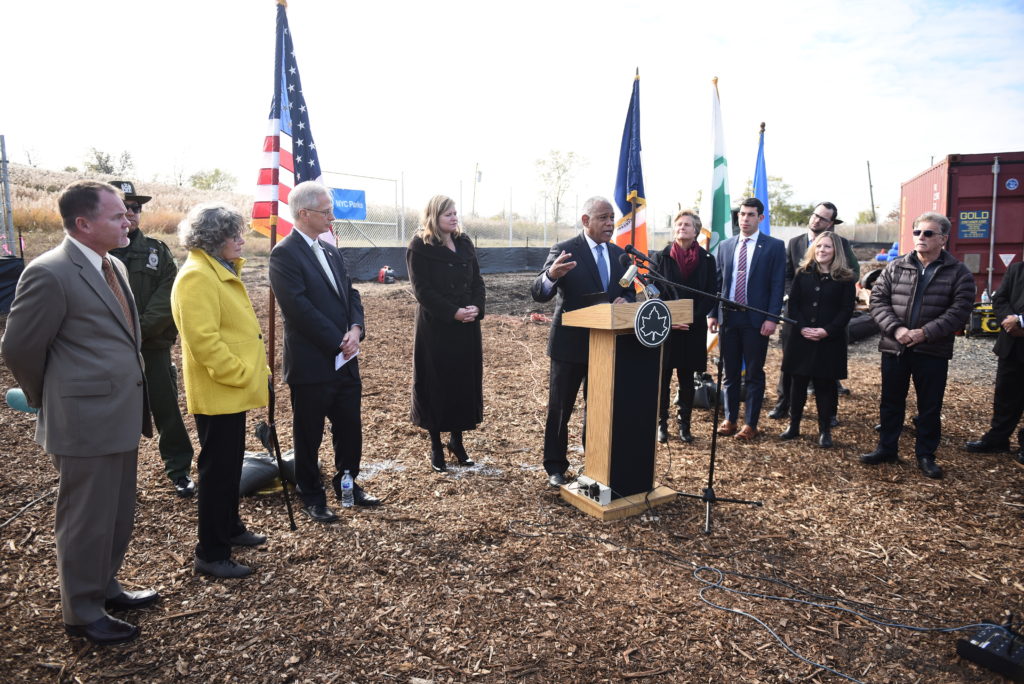 This $29.7 million project will construct a broad multi-use pathway, secondary paths, a seven-acre seed farm, forested plateau, composting comfort station, picnic lawn, waterfront overlook deck, a bird observation tower and bicycle repair station. This section of North Park is expected to open in 2020 and will include a parking lot for visitors containing more than 60 parking spaces. Entrances to North Park will be located at the parking lot and at the adjacent Schmul Park.

“This is a tremendous milestone for the city and land reclamation efforts worldwide,” said NYC Parks Commissioner Silver. “The Department of Sanitation has been working around the clock to make this land safe and usable again. Now, it’s our turn to get our hands dirty and build a beautiful park. North Park is just the beginning—once we’re done, Freshkills will be the second largest park in New York City behind Pelham Bay in the Bronx.”

“The Department of Sanitation is pleased to participate in today’s groundbreaking event for the first major section of the new Freshkills Park,” said Sanitation Commissioner Garcia. “The enormous transformation of this incredible property from a massive solid waste site to a vast urban park demonstrates exactly what can be done by an imaginative government to restore land to a viable and sustainable usage.”

“It has been sixteen years since Fresh Kills ceased operations as an active garbage dump, and Staten Islanders are eager to see the transformation of the former landfill into a dynamic public park,” said Borough President James Oddo. “North Park marks an important milestone, as it will be the first section inside landfill boundaries to become public parkland. I hope to see the park become a magnet for active recreation and an oasis of natural open space. I commend Sanitation Commissioner Kathryn Garcia and Parks Commissioner Mitchell Silver for the continued inter-agency cooperation that guides the transformation from landfill to Staten Island’s largest public park.” 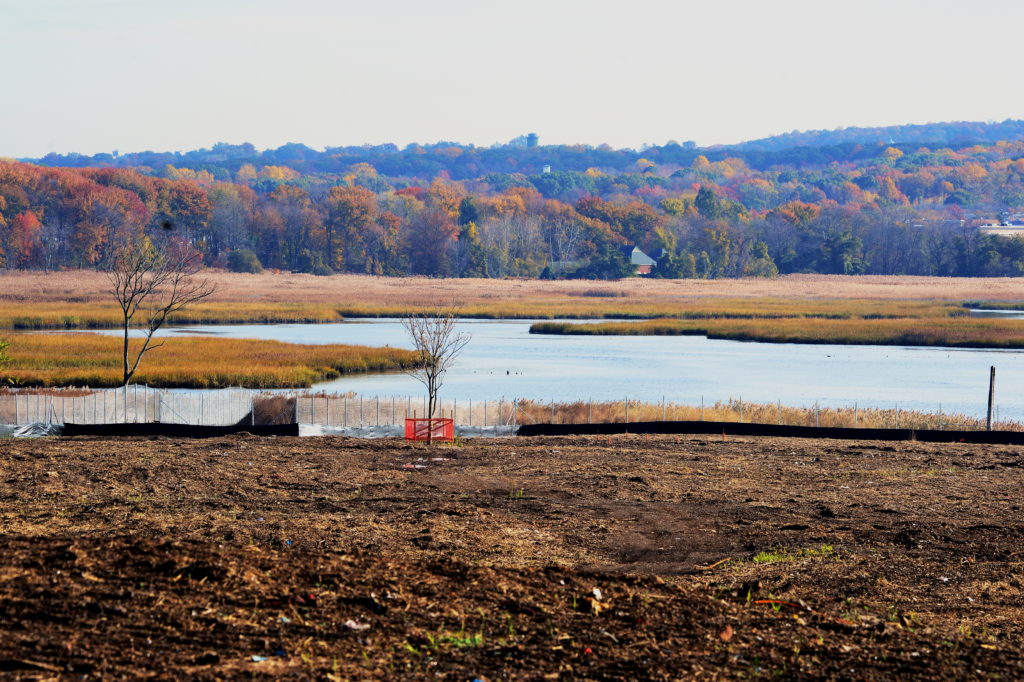 DSNY’s closure construction of landfill sections 3 &4 (the future North Park) included the installation or expansion of environmental management systems, including a multi-layered “cap” made of different types of soils and synthetic materials. As a system, the final cover separates the landfilled waste from the environment, prevents water from coming into contact with garbage to create leachate, prevents landfill gas—the result of decomposing waste–from building up to explosive pressures, and promotes stabilizing and aesthetically pleasing vegetation. Other closure components included stormwater management and erosion controls; landfill gas collection, emissions and migration controls (to protect air quality, prevent odors and protect neighboring communities); and a leachate containment and collection system (to protect the groundwater).

Freshkills Park will open in phases, with phase one of North Park being the first section to open inside the landfill boundary. Future phases will complete the rest of North Park and other sections of Freshkills, which is expected to be open in its entirety by 2036. Construction of North Park phase one was funded by the Mayor’s Office, in addition to an award for $1.2 million from the NYS Department of State Local Waterfront Revitalization Program.

“For decades, the people of Staten Island were burdened with the world’s largest landfill, until it was finally closed in 2001,” said City Council Member Steven Matteo. “Today’s groundbreaking of North Park is not only important symbolically, it marks a significant and real step forward in transforming what once was an environmental atrocity into an economic, social and environmental asset to the borough and the city. “

“It is good to see that New York City Parks is making progress on transforming what was once a crime against nature into one of the gems of the city parks system,” added Assembly Member Matthew Titone.

“I am glad to see the progression of Freshkills Park coming underway,” said Assembly Member Cusick. “In the year of 2020, Staten Islanders will have access to a park with bike lanes and a bird observation tower. Being the borough of Parks, Freshkills Park, encompassing 2,200 acres of land, will be a symbol of evolution for the site.”