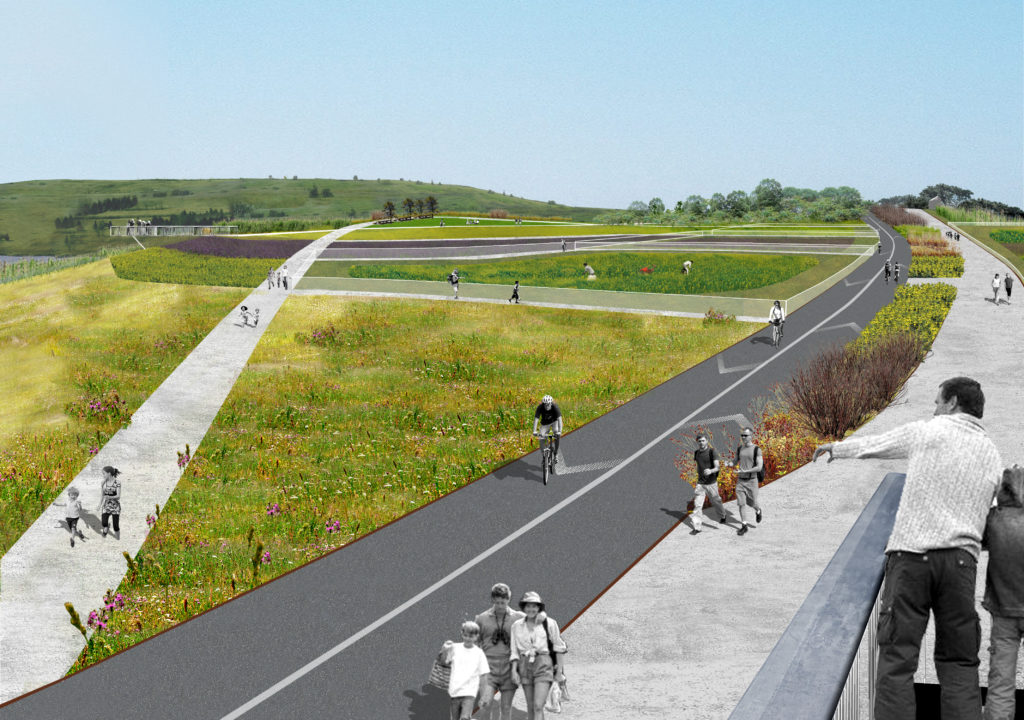 Rendering: View of North Park from the bird observation tower.

We are excited to announce that construction on Freshkills Park’s North Park is now underway! This milestone 21-acre project will be the first section inside the Fresh Kills Landfill boundaries to become public parkland. NYC Parks completed the design for the project in March 2016, and the procurement phase ended in June 2017. The project is expected to open to the public in 2020.

Phase one of North Park will provide opportunities for picnicking, walking, jogging, biking, and birdwatching. A broad multi-use pathway and secondary paths will connect visitors to an overlook deck and a bird observation tower, with views of Freshkills Park’s hills and waterways and the adjacent William T. Davis Wildlife Refuge.

At North Park, the NYC Parks Greenbelt Native Plant Center will operate a seven-acre seed farm. The seed plots will grow into flowering meadows, with native plants like Purple Coneflowers and Black-Eyed Susans. The project will also include a new parking lot, a composting comfort station, and a bicycle repair station.

At 2,200 acres, Freshkills Park will be almost three times the size of Central Park. As the world’s largest landfill-to-park project, the park is a symbol of renewal and an expression of how we can restore balance to the landscape. North Park Phase 1 is part of a multi-phase process to open North Park and other sections of Freshkills Park to the public.

The park is being developed from the outside in, with the first projects developed along its edges so that people are able to enjoy the benefits of the new park space as soon as possible. Owl Hollow Soccer Fields on Arthur Kill Road, the redesign of Schmul Park on Wild Avenue, and the 3-mile New Springville Greenway along Richmond Avenue are already open to the public.