The Theory Behind the Sketch and Stroll, Personal Geography and Freshkills Park

Artist Eva Neves will lead two walking tours at Discovery Day on June 26th. Called Sketch and Stroll, the walks invite people to practice being more mindful and aware as they move, drawing their thoughts, feelings, and stories in relation to their surroundings. Sketchbooks and drawing materials are provided. Here, Eva explores the theory behind these walks and how they relate to Freshkills Park. 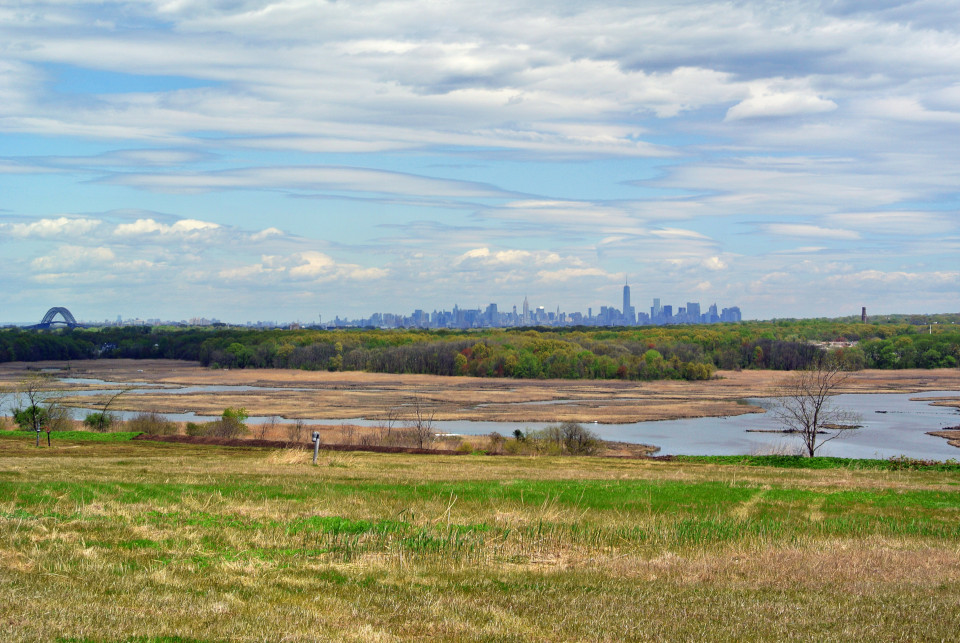 What potential does a map hold? What can a walk through the city inspire? What do 2,220 acres of seemingly blank urban space represent? How can we bring art back into the everyday?

At 2,200 acres, Freshkills Park will be the second largest park with possibly the most expansive views of and in New York City. It is a complete blank slate, ready to be built. Walking through Freshkills Park is a unique experience, different from strolling through any other part of the city. The green hills, the landfill gas containment wellheads, and the wetlands create an unexpected but beautiful marriage of nature and infrastructure. In order for Freshkills Park to be the beautiful open land that it is today, 150 million tons of waste had to be covered up by seven layers of heavy-duty infrastructure. As a result, the land is not only filled with physical matter, but with history, memory, and emotions. During this Sunday’s Sketch and Stroll, Discovery Day visitors will take part in a tour inspired by The Situationist International movement and psychogeographical thinking. Freshkills Park is a perfect framework for thinking about our personal relationship to space. A good way to start thinking differently about space is to take a walk and draw one’s thoughts, feelings, and stories in relation to their surroundings.

The Situationists International Movement and the Art of Walking

The Situationist Internationals (SI) formed in 1950s France as a group of artists, writers, intellectuals, and political theorists inspired by the Dada, Surrealism, and Letterist International movements. Led by artist Guy Debord, their manifesto focused on concepts like unitary urbanism, which rejected traditional architecture of urban environments and the detachment of art from our surroundings. The SI movement was heavily influenced by Marxist theory and members believed that capitalism and advertisements of the mass media degraded individual expression and took away from the quality of everyday life. They used practices like the Dérive to bring playfulness, art, and freedom into everyday movement throughout their urban environments. 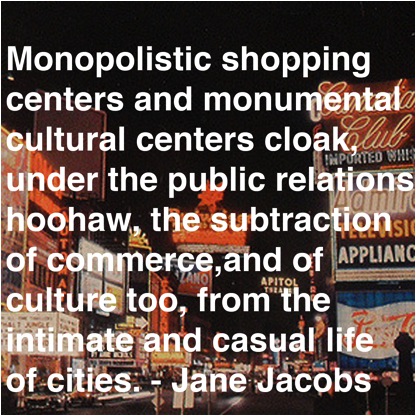 The “dérive” is a performative walk in which one takes an unplanned journey through a landscape. During a dérive the goal is to shed habitual movements of everyday life. A dérive can be guided by random prompts for movement or be the walker being “drawn by the attractions of the terrain and the encounters they find there” (Guy Debord). This exercise brings art and playfulness into everyday experience allowing the participant to start rethinking their place in space. Instead of going through the motions we are jerked out of our regular movements and are forced to be truly aware of our surroundings. 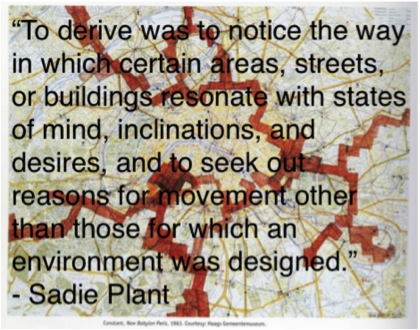 There are many modern ways to participate in a dérive. The apps “Drift” and “Dérive” allow you to dérive using your smart phone, after which, you can record your path and share your findings and experiences with other users. 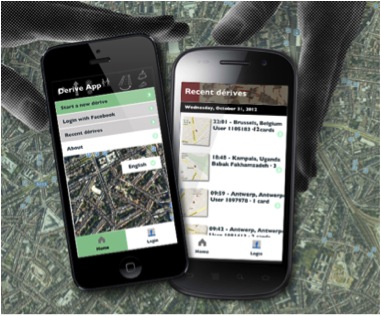 Personal Geographies and the Art of Map Making

Personal Geography, or as The Situationists called it Psychogeography, was defined in 1955 by Guy Debord as “the study of the precise laws and specific effects of the geographical environment, consciously organized or not, on the emotions and behavior of individuals.” Simply put, it is the idea that our geographical environment relates to us personally. Dérives are a crucial aspect of personal geography, and are a useful tool for thinking about space on personal and emotional terms. One of the main ideas of psychogeography is to get lost. ”Once we start thinking in this way, maps become more than just tools for getting us from a to z. They become ways for us to express how we remember space, how we personally experience space, and how we feel about that space.” At this point maps can become a form of art. Books like We Are Here: Personal Geographies and Other Maps of the Imagination by Katharine Harmon, are filled with beautiful examples of artistic maps that tell stories about the lives and experience of the map makers. 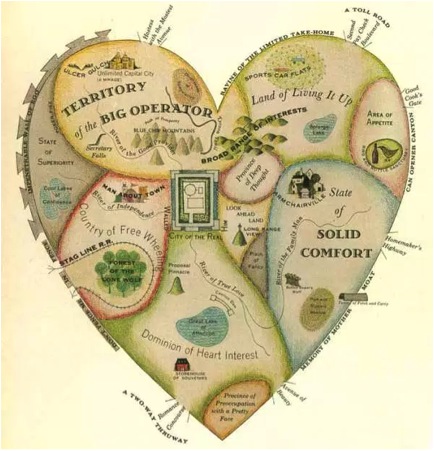 Corazon by Jo Lowry From You Are Here

Cartographer Dennis Wood, featured in We Are Here, is a perfect example of a radical cartographer who uses artful maps to put forth new perspectives on space. His book Everything Sings: Maps for a Narrative Atlas includes maps of Squirrel highways, all the jack-o-lanterns- in the neighborhood, and this map of sidewalk graffiti. You may not be able to find your way using his maps, but they provide new frameworks for thinking about a place in a beautiful and playful way. 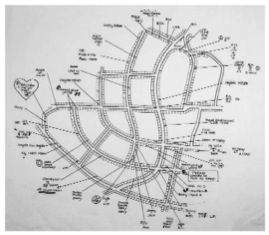 During the Sketch and Stroll I will encourage participants to think about their personal relationship to space and how it can be drawn as tool for moving beyond traditional landscape drawings. During past tours, participants have created maps chronicling all the methods of transportation it took for them to get to Freshkills Park, written stream of consciousness poetry, and created gesture drawings of a tree they found beautiful and interesting. 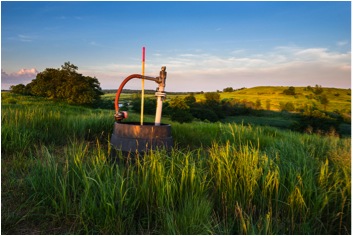 New York City can seem like the most exciting place or it can be completely monotonous. Each day I walk the same two blocks to reach the subway. I look down at my phone and swipe. My blinders are always on and I only see the ground in front of me. This type of mindless, repetitive, and joyless movement is something the Situationists were trying to move away from. They believed that simply being aware on a walk could bring art into everyday life. The Freshkills Park landscape is like no other; it is striking in a way that forces awareness. The park is not only physically layered, but also serves as a metaphor for the layers of history, politics, and stories of daily life that make up Staten Island.

Now with all of this in mind we return again to the Sketch and Stroll. Freshkills Park serves as ample inspiration for drawing from life, mapping, sculptural creation, the merging of art and nature, poetry, urban planning and so much more. The drawing portion of the walk is open and unguided. I invite you to walk with me this Sunday for an experiment in drawing Freshkills Park. Sketchbooks and drawing materials are provided.

I want to leave you with a passage from one of my favorite books, Invisible Cities by Italo Calvino. In this passage Marco Polo describes a city, Zaira, where he perfectly encompasses the essence of personal geography. He illustrates that a city is not made of its landmarks, but of its history and the memories of those that live there. The geography of Freshkill Park, like Zaira, is filled with meaning, not through its rolling hills and flare stations, but through the political, personal, and emotional stories Staten Islanders, New Yorkers, researchers, artists, and sanitation workers have to tell about it.

In vain, great-hearted Kublai, shall I attempt to describe Zaira, city of high bastions. I could tell you how many steps make up the streets rising like stairways, and the degree of the arcades’ curves, and what kind of zinc scales cover the roofs; but I already know this would be the same as telling you nothing. The city does not consist of this, but of relationships between the measurements of its space and the events of its past: the height of a lamppost and the distance from the ground of a hanged usurper’s swaying feet; the line strung from the lamppost to the railing opposite and the festoons that decorate the course of the Queens’s nuptial procession; the height of that railing and the leap of the adulterer who climbed over it at dawn; the tilt of a guttering and a cat’s progress along it as he slips into the same window; the firing range of a gunboat which has suddenly appeared beyond the cape and the bomb that destroys the guttering; the rips in the fish net and the three old men seated on the dock mending nets and telling each other for the hundredth time the story of the gunboat of the usurper, who some say was the queen’s illegitimate son, abandoned in his swaddling clothes there on the dock. As this wave from memories flows in, the city soaks it up like a sponge and expands. A description of Zaira as it is today should contain all Zaira’s past. The city however, does not tell its past, but contains it like the lines of a hand, written in the corners of the streets, the gratings of the windows and banisters of the steps, the antennae of the lightning rods, the poles of the flags, every segment marked in turn with scratches, indentations.

Thank you for reading and I hope to see you on Sunday!