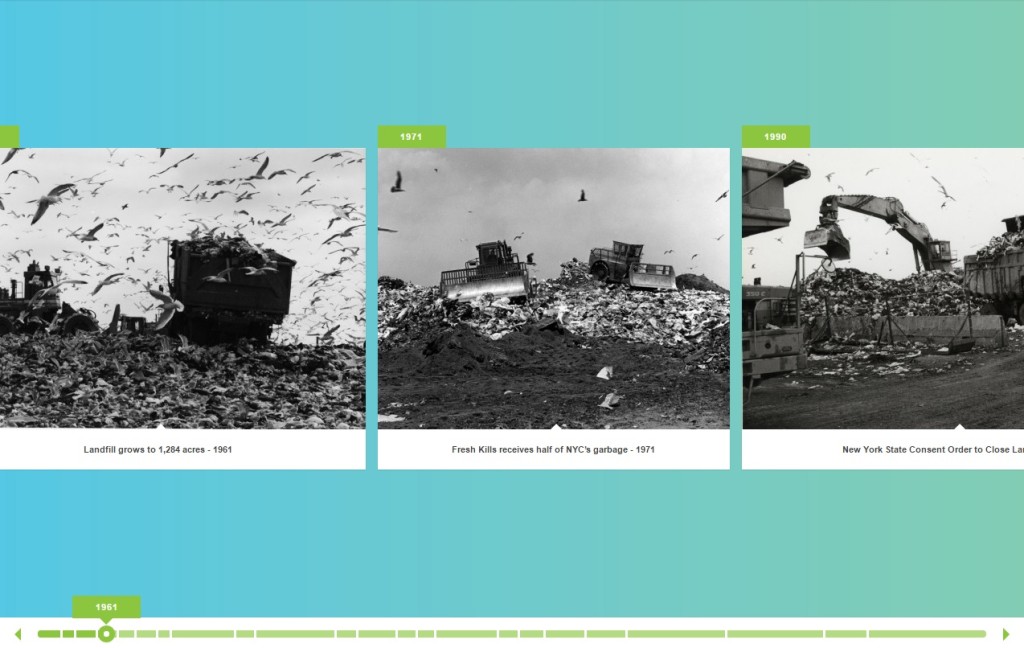 Fifteen years ago this week, the final barge of household garbage arrived at Fresh Kills Landfill. To celebrate this milestone, the website’s new interactive landfill-to-park timeline illustrates almost 100 years of changes in the area.

The last barge to Fresh Kills marked the end of 53 years of landfill operations. Between 1948 and 2001, it had become the last remaining landfill in New York City and the largest in the world. The March 22nd closure signaled a major change in the city’s waste management plan. It also represented a shift to envisioning a new purpose for the 2,200 acre site.

By 2001, there was already talk of a future park. The City of New York Department of Sanitation (DSNY) had capped two of the landfill’s four major sections, covering the garbage with layers of soil, impermeable materials, and thousands of feet of underground pipes and infrastructure, and seeding the hills with native grasses. Later that year, the City of New York would announce an international design competition to foster the development of a plan for Freshkills Park.

In the fifteen years since then, DSNY has continued capping and monitoring the site and New York City Department of Parks & Recreation (NYC Parks) has begun to open Freshkills Park in phases, using a plan from architecture firm Field Operations as a framework. Three sections along the perimeter are now open to the public: Owl Hollow Soccer Fields, Schmul Playground, and the New Springville Greenway.

The first section within the former landfill boundaries, a 20-acre area known as North Park Phase 1, is scheduled for completion in 2019. Future plans include miles of walking trails, a kayak launch, and a roadway that would connect Staten Island’s Richmond Avenue with the West Shore Expressway.

As development continues, the closed sections of the park have become a place for wildlife. More than 100 species of birds have been seen along the creeks and meadows, including osprey, bald eagles, and grasshopper sparrows. This return of nature serves as a good reminder of how important a resource open spaces are.

With the help of the Freshkills Park Alliance, NYC Parks staff are leading art and science programs that focus on the closed sections. This moment in development is a unique opportunity for artists to use the landscape to express their vision and for scientists to conduct research that furthers the knowledge of sites like Freshkills.

Public events and tours are also inviting the public to explore and learn about the ongoing transformation. Discovery Day events on May 15 and June 26 will invite people to explore 700 acres and 8 miles of trails with free tours and recreation along the rolling hills of the former landfill. Visitors are able to see how much has changed, learn about how a place can be recycled, and envision what the area will be like fifteen years from now.

To view the new interactive timeline and learn more about the park project, visit timeline.freshkillspark.org.