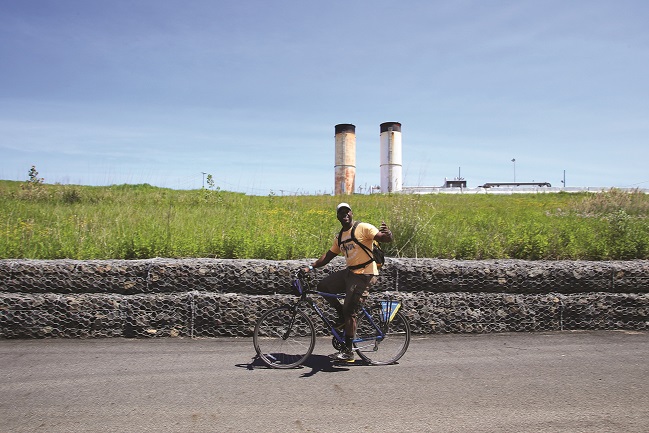 Freshkills Park offered a Discovery Day event on May 15th, 2016 from 11am to 4pm. During this free event, 700 acres and eight miles of trails in the otherwise closed site were open, providing opportunities to explore and learn about the landfill-to-park project.

Just before Discovery Day began, the Mid Island Rotary Club of Staten Island hosted a 5K Run/Walk at the park starting at 10:30am. During the event, The Freshkills Park Alliance provided free bike rentals during the event, and visitors were welcome to bring their own bicycles into the park. NYC Audubon offered free guided bird walks to experience the benefits that the restoration of Freshkills Park is having on local wildlife. Artist Eva Neves and DSNY Program Manager for End Use Development Robin Geller also led free educational tours.

A WSIA DJ played music during the event. There were also food trucks available for lunch at the park. City Parks Foundation brought their traveling puppet show, The CityParks PuppetMobile, to Freshkills Park at 2:30pm. The Urban Park Rangers led an activity called “Deer Survival Game,” which illustrates how wildlife share space with people. The NYC Compost Project had educational activities and information about composting. Kayak Staten Island led two tours along the creeks at Freshkills Park, and Transportation Alternatives led a social ride through the park.

Sponsors
Special thanks to Pratt Industries and Panera Bread for sponsoring Discovery Day on May 15th.

At 2,200 acres, Freshkills Park is almost three times the size of Central Park and the largest park to be developed in New York City in over 100 years. It also has a significant history as the site of the former Fresh Kills Landfill, which was the largest landfill in the world before closing in 2001. Since then, the landfill has been covered with layers of soil and infrastructure, and the site has become a place for wildlife, recreation, science, education, and art.  As the park is built in phases, free tours and events provide early access for learning and exploration opportunities.