A Look Back at “Landscape in Motion” 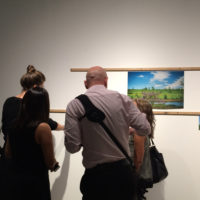 Photographer Dimitrios Papanikos next to his winning photograph. 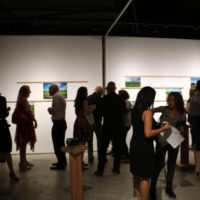 Visitors at the Landscape in Motion opening reception. 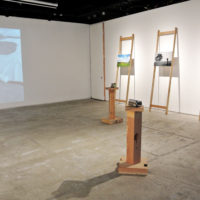 When Robert Moses established a landfill in 1948 on the tidal wetlands and coastal marshes of Staten Island’s West Shore, he saw it as a temporary solution to waste management with long-term development benefits. He had proposed to fill the wetlands with trash for three years to create stable ground for new development. Instead, Fresh Kills Landfill became the largest landfill in the world and operated for 53 years before it closed in 2001. The site is now becoming Freshkills Park–2,200 acres of wetlands, creeks, and expansive meadows atop landfill infrastructure–an unusual combination of natural and engineered beauty, evolving over the next two decades.

While this astounding ecological renewal proceeds, the majority of the Park remains closed to the public. Photography has become an important part of tracking, processing, and responding to the changes at Freshkills over time. The Park’s Capturing Change photography program is a series of photo essays documenting Freshkills Park’s transformation from the world’s largest landfill into the largest New York City park developed in over 100 years. Although the shift from landfill to park is subtle and slow, photographers are capturing the current moment and revealing potential in this grand landscape.

Three public programs were also organized in the space: a talk on landscape photography by Paul Moakley of TIME and the Alice Austen House, a talk by NYC Sanitation Artist-in-Residence Mierle Laderman Ukeles, and a virtual reality workshop to explore future landscape architecture projects with SCAPE. In addition to the program attendance, 1,100 people viewed the exhibit. Visitors were encouraged to explore the evolution from the site’s pre-landfill state through its current stride, and imagine its future as it is progressively reclaimed.

Links to Jarred Sutton’s virtual reality experiences can be found on YouTube and Roundme.