Since its inception, the Freshkills Park team has fostered partnerships with artists from a variety of disciplines in an effort to document this preliminary phase of park development through creative expression. Over time, a number of works have emerged, ranging from ink studies produced within the confines of an old shipping container to bound notebooks created from the park’s ubiquitous invasive Phragmites plant. For the last two years Photographer-in-Residence Jade Doskow has been capturing Freshkills, whose work was recently featured in the New York Times Metro Section. Through her large-format, full-color images of the site, the transformations — natural and unnatural, dynamic and  incremental, seasonal and yearly — become visible.

Recently, we sat down with Doskow to discuss what brought her to Freshkills and her work being featured recently in the New York Times. 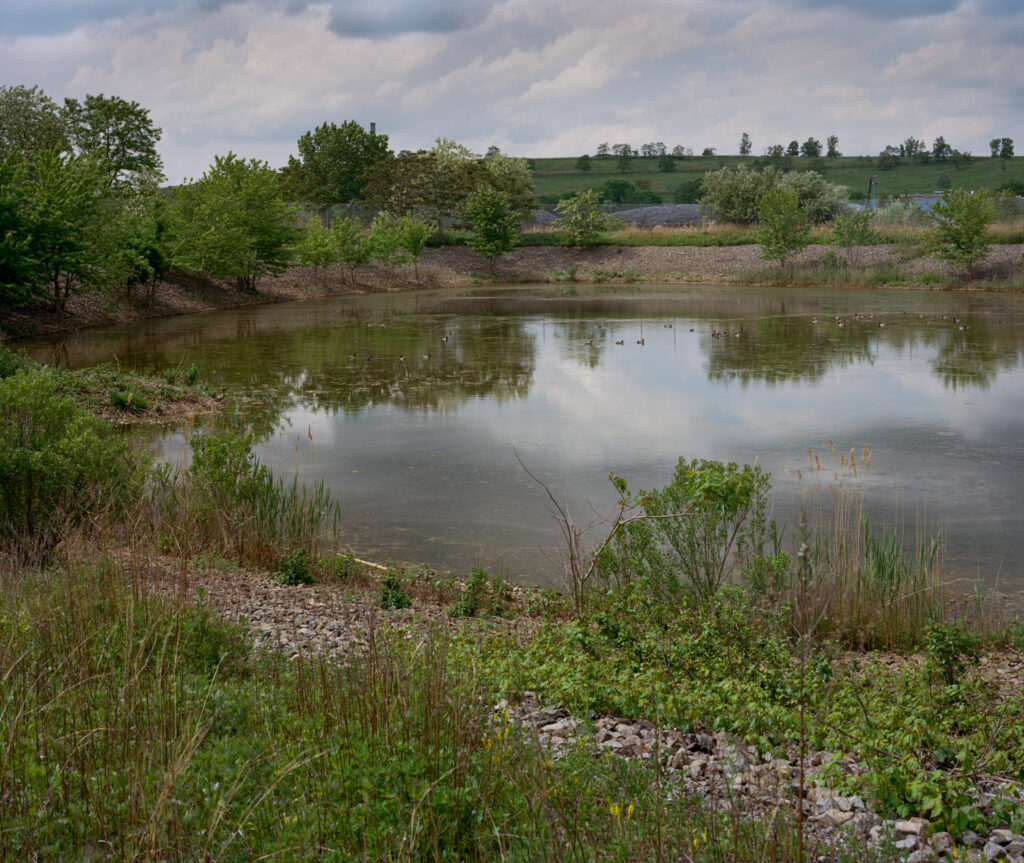 FKP: What drew you to Freshkills Park and how did you end up establishing it as a project site?

There are several consistent threads which have run through my artistic practice for many years: a fascination with human-built structures that have outlived their original intentions or transformed completely, and an appreciation for the complexities of urban planning in a city as dense and multi-layered as New York, my home for many years. Prior to making work out at Freshkills, I completed a 12-year project called Lost Utopias, in which I traveled the globe photographing the remaining architecture, art, and landscaping of international world’s fairs. These were structures and landscaping initially designed to represent futuristic, utopian notions of design and culture through architecture, but after the fairs closed, these sites often existed uneasily in a limbo-state of disrepair or tourist attraction. When I first visited Freshkills in May 2018, it immediately struck me as an inversion of this previous work: dystopia to utopia, as seen through the gorgeous, undulating hills of meadows, the wilderness thriving upon what was once mounds of garbage. I immediately understood the immensity of Freshkills as a major chapter in the story of New York City’s infrastructure and one which was vital and necessary to record through photography.

FKP: Your work at Freshkills involves the use large format photography.  How does this format influence your work as a whole?

Large format photography is the polar opposite of iPhone photography, of Instagramming. It involves always working on a tripod and lugging a tremendous amount of heavy gear. When composing an image, I must move the camera on its tripod to roughly where I feel the picture should be made, and then, under the dark cloth, see the landscape, glowing and upside down upon the ground glass, and begin the process of understanding the first outlines of the composition. There is extreme intentionality in working this way. There is a poetic sensitivity to light in how it is rendered through this kind of apparatus and onto a sheet of film that still is a bit different than through digital cameras – the difference between an old grand piano and a new upright, for example. I have worked almost solely with large format for about 12 years now, and it feels both natural but still challenging to me. This endless challenge is important. It reduces the risk of sloppiness or redundancy. Also, to experience the landscape upside down is a completely different mental translation than right side up. While I can’t explain the exact relationship between neural pathways and optic nerves, I can say with certainty that I am unable to make my work with a normal camera at this point. The way that one understands form, spatial relationships, and even nuances in color, is drastically altered when viewed inversely. Freshkills is a major feat in engineering, landscaping, chemistry, environmentalism, and reflects a lot of hard work to get to this point by the Freshkills Park Alliance, the New York City Department of Parks and Recreation, and especially the New York City Department of Sanitation. As such the subject should be treated reverentially, which the big camera allows me to do – to treat the landscape with the respect that it deserves. Lastly, there is a direct lineage between the pioneering photographers of the 1800’s and the work I am doing here, with this similar camera apparatus; I see myself as a new kind of photographic pioneer, traversing a brand-new, human-made wilderness right here in New York, rather than heading west or to battlefields far away.

FKP: What has been different about the experience of creating art at Freshkills compared to past projects?

Most of my past work has been fairly architectural in focus: in Red Hook, photographs of vernacular architecture; in Lost Utopias, photographs of pavilion buildings and iconic towers. This is the first landscape project I have embarked upon. Landscape work is fascinating in that it is much less object-based than architectural shooting. It is overwhelming initially. There’s me and my camera and 2,200 acres of land – where to look? What to point out? The experience is almost entirely about light sculpting the landscape before the camera, aesthetically. Conceptually, this feels extremely current compared to past work. There is no more pressing topic than the environment, and here is this place which offers a solution, a way forward, however imperfect, with all of the complications that this comes with. The complexities of Freshkills are absolutely wonderful. Making this work is an absolute dream. I relish every day I have out working on the site and look forward to these days immensely.

Also, on a practical, logistical level, Freshkills is just far enough away from where I live that I can access the site at least a few times a month if I need to, while still being far enough away that there is an aura of mystery, of suspense, before I arrive for each shoot. 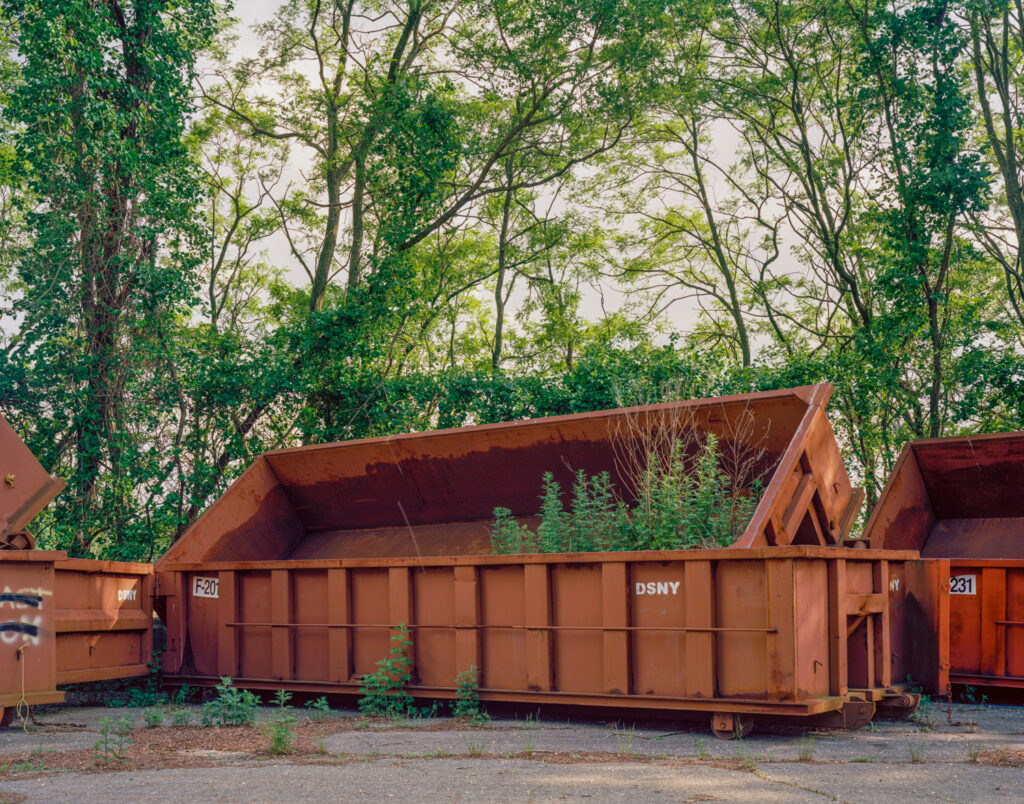 FKP: You have described Freshkills Park as a postapocalyptic Hudson River School Painting, can you elaborate?

The Hudson River School painters operated, in some respects, from the premise of transcendentalism; that we are but unworthy humans before the splendor of nature. You can see this in their paintings, of course – the immense, dramatic skies, the diminutive scale of humans or human-made items in relation to the wilderness beyond, the power that is presented in trees and weather and landforms through paint. Freshkills is an inversion of this; it was, initially, if not as glorious a landscape as the Hudson River Valley, glorious in its own functional way of low-lying marshlands. The Indigenous people of the region lived and thrived among these marshes, with the abundant nature that once was here, fish, shellfish, etc. As early as the 1800’s white settlers started dumping in the marshes, until of course, Robert Moses made the ill-fated decision, in 1948, to open Fresh Kills to all of NYC’s trash, completely destroying 2,200 acres of prime New York wilderness in the matter of 53 years.

Today, I stand on this landscape which was the largest blight of the entire New York Cityscape and see rolling meadows and hills, osprey circling overhead, crickets and grasshoppers singing their songs in the tall grasses. The sky is huge and open, somehow untainted by the smog of New Jersey’s industrial corridor and the light pollution of Manhattan. There are signifiers throughout the Freshkills landscape that this is not just an ordinary meadow or grassland; there are methane wells and pipes protruding at intervals as far as the eye can see. At dusk the sky transforms and bathes the mounds in golden-red light, as majestic as one could imagine. And so I try to capture the majesty, the ethereality, and the wonder of Thomas Cole, of Asher Durand, while also flipping it, as within the beauty of Freshkills there are those methane pipes and exhaust valves, the infrastructural elements that essentially are the reasons this new wilderness can actually function. From the awe of the 1800’s and unspoilt nature comes 2020 and nature recreated, albeit with a few adjustments. It is a very new kind of sublime landscape.

FKP: Your work was recently featured in the New York Times, can you tell us about the experience?

This past August 2020, the New York Times debuted my photographs in a 3-page spread in the Metro Section, with two articles online and writing by the fantastic urban exploration/ biology/ history-writer Robert Sullivan. This was a thrilling experience, and I cannot imagine a more perfect place than the Times to debut this project publicly for the first time – a sort of in-print exhibition. It was a huge honor for both my work and for Freshkills.

FKP: In the New York Times you mention being committed to photographing Freshkills over 10 years.  How do you think your project may change as Freshkills changes?

As Freshkills is slowly evolving and transforming, so too is my approach to the site. With every shoot, my understanding changes and deepens; with every shoot, my goal is always to do something differently, to find something new, whether factually or photographically. There are the obvious changes, seasonal, structural, etc., but I am finding that with every month something new evolves in my work, in my relationship to this unusual landscape, none of which was initially predictable. For example, I find that I am thinking about the land artists of the 1970’s a lot, and that essentially Freshkills feels like a huge sculptural form, land art as created by DSNY; I find these sculptural, topographical qualities endlessly compelling to photograph. This is also the power of large format photography as the correct tool for this landscape; the large format camera offers the opportunity to carefully study scale, perspective, and topographical variations to a much more minute degree than other cameras. My understanding of the complexities of the site constantly fluctuates, as I spend more time cumulatively observing flora and fauna and how the actual wild interacts with this very human-made landscape. The artifice of this wilderness, the problematic nature of what lies beneath, as this major paradoxical element to the extreme beauty of the place is just awesome.

FKP: What plans do you have for the project when it is complete?

Right now, I am starting to work on exhibition proposals for museums and galleries; most likely the exhibitions will incorporate huge photographs, big enough to convey the sense of actual scale of the place, as well as multimedia components which I have just begun to consider. While at some point a large, final book is an obvious way to share this work, in the meantime I am brainstorming concepts for smaller books in the interim – stay tuned!