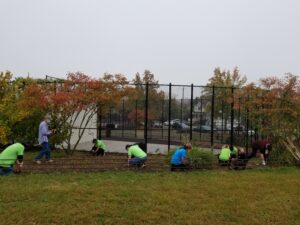 Volunteers prepare a site for planting

The Covid-19 pandemic has impacted virtually every aspect of our daily lives. Our outdoor spaces, including our urban parks, have seen huge increases in usage while also facing budget cuts that have limited maintenance staff and operations. This fall, volunteers supported Freshkills Park by removing invasive species and planting a biodiversity garden at Schmul Park. Since November, however, Freshkills in-person programming has been on pause. This reduction in staff paired with the need to reduce the number of people working in close proximity to each other and the public has led some land managers to think of alternative maintenance strategies. One such land management strategy that has gained popularity during these times is the use of goats to control invasive species growth. 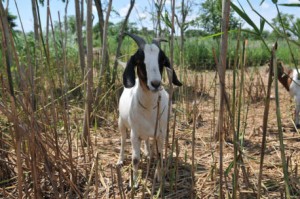 You have probably heard that goats are good eaters. They also don’t need to follow social distancing guidelines, leading them to be useful gardeners in these times. Goats are known to be rather indiscriminate in their eating in fact. Goats can consume up to 20% of their body weight daily, and will consume difficult to remove, non-native plants; they have been shown to eat and weaken phragmites, a tall weed that chokes out other vegetation. In addition, they consume goatweed, poison ivy and other invasive weeds that are a nuisance to get rid of.

Here at Freshkills Park, goats were used in 2012 for some of the invasive plants removal associated with our North Park Wetland Restoration project. The goats grazed back the phragmites that was present on the 2-acre site before additional restoration efforts took place. Goats have also helped remove invasive species at Fort Wadsworth and in Prospect Park. 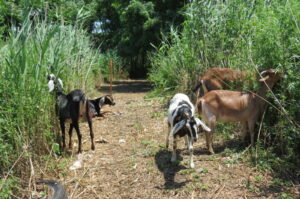 Phragmites is an invasive reed prevalent in wetlands along the Eastern Seaboard. It turns diverse wetlands into monocultures by pushing out native species like  Spartina alterniflora. Wetlands that are overgrown with phragmites can be less resistant to habitat changes and support less biodiversity. Additionally, phragmites have complex root structures and are incredibly difficult to remove. 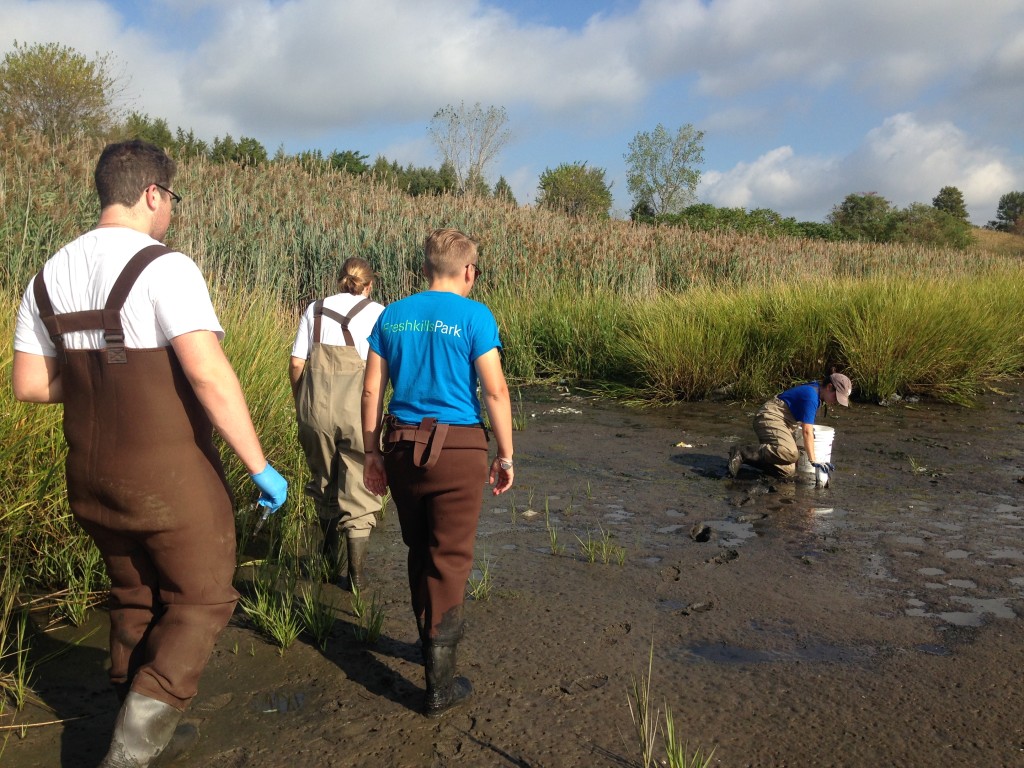 Spartina (in front) competing with phragmites(in back)

Goats are effective at removing phragmites and other invasive species because they eat plants all the way to the ground. The complete removal of above-ground growth uses much of the plant’s energy, making it difficult for invasive plants to regrow. Goat-eating is more effective than mowing, which leaves a few inches of growth on the ground and allows the plants to regenerate faster.

Since 2012, we have monitored species diversity in the North Park wetlands. Because phragmites are so prevalent, we are also exploring alternative approaches to supporting healthy wetlands. The Living Shoreline project adds biodiversity to areas with phragmites by introducing species like ribbed mussels and algae. On February 2, National Wetlands Day, we’re grateful for the four-legged gardeners who keep the Freshkills wetlands healthy.