Garbage is big business in the Big Apple—nearly 2 billion dollars worth of the city’s budget goes to the Department of Sanitation (DOS); and of that: $300 million is spent just disposing of it elsewhere. Last year this amounted to a cost of $95 per ton, up 28% since 2004, far outpacing inflation. However, a composting program at New York City Schools is attempting to change the narrative on waste as a drain on the budget. There are 1,300 school buildings for nearly 1,800 individual schools that serve 1.1 million students in New York –the largest school district in the nation.

Rules requiring the both the serving of fruits and vegetables and strict health/safety codes results in uneaten, much less untouched food being thrown out once its placed on a students’ tray. These rules create a large amount of compostable materials in schools, so much so that it is believed that 40% of all school waste could be diverted from landfills just because it fits this category. An innovative composting-program spearheaded by GrowNYC will reduce school waste by 80% through the use of recycle + compost stations.

One such school is PS 30 in Staten Island where during lunchtime members of  the “Green Team” monitor the station as students dispose of their items in four bins in an assembly-line like manner: Liquids, Organics (aka compostable items), Metal/Glass/Plastic and finally a trash bin labeled “landfill,” for everything else –hopefully little. The whole idea behind this program is to target students and encourage them to separate their waste by category. This greatly reduces the amount of trash that is sent to out-of-state landfills because it is diverted into specific bins before DOS picks it up. Contaminated (recycled waste mixed with trash) or non-separated waste is recycling’s biggest foe because of the sheer number of workers needed to separate the waste produced by the city’s school system. By separating waste before it gets to the curb, schools are able to substantially increase the percentage of its waste that is recycled. In turn, the waste pick-up schedule is changed  to reflect the production ratio of 40% organics, 40% Metal/Glass/Plastic and 10% Landfill. For instance, a school may now receive landfill waste pick-up only once a week and recycling/organics service three times a week. Before this program the schedules were in a directly opposite relationship. 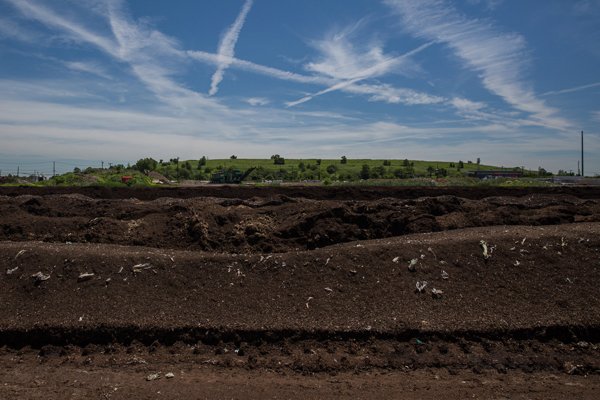 At the waste transfer station on Staten Island, located adjacent to Freshkills Park, organics waste is turned into soil. It is important to note that no trash is dumped here; it is transferred into rail containers and shipped to South Carolina. At the compost site, organics waste is laid upon a bed of woodchips and mixed; in less than a year it is ready-made soil that is sold to the public and given to Community Gardens. Compost can also be turned into energy through the process of anaerobic digestion by capturing the biogas created from decomposing organic matter.

Innovative waste to energy initiatives are transforming the way we think about waste, moving towards a more sustainable future. Who knows, maybe that banana peel you through out may one day come back in the form of electricity that charges the very computer you are reading this article on…