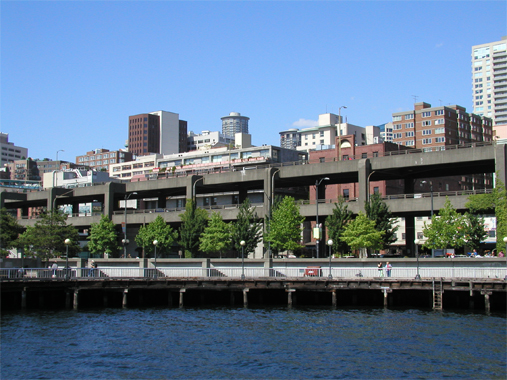 Landscape architecture and urban design firm James Corner Field Operations, designers of the master plan and early projects for Freshkills Park as well as of the High Line, have garnered another high-profile commission: designing a new nine-acre park on Seattle’s waterfront.  The Washington State Department of Transportation plans to replace the aging Alaskan Way Viaduct—a double-decked elevated expressway that is one of two major north-south corridors in Seattle—with a deep-bore tunnel running underground.  After the viaduct’s slated demolition in 2016, the City envisions developing a waterfront with open space, a tree-lined boulevard and possibly beaches for use as kayak launches and for kite flying.  The waterfront strip could connect Seattle landmarks including Pike Place Market, the Seattle Aquarium, Pioneer Square, sports stadiums and the Olympic Sculpture Park.

JCFO was among four finalists for the $830 million waterfront redevelopment project, which will include relocation of utilities as well as sea wall contruction.  Together with the Central Waterfront Partnerships Committee, the firm will now undertake a planning process including public and specific stakeholder meetings that will proceed for the next few years.  Design work will begin next month, with a conceptual plan to be developed in 2012.  Design will be finalized by 2015.