Over the past several decades, there has been a steady decline – paired with an increased consolidation – of landfills within the United States. This is due, in part, to a number of federal legislation that revised and updated the operational practices and permitted locations of municipal waste disposal. Many former landfills have been transformed into beautiful assets to their communities – among them: Mount Trashmore in Virginia Beach; Cully Park in Portland, Oregon; and Millenium Park in Boston. They have been variously re-imagined as parks for passive and active recreation, as reserves for environmental preservation, and as sanctuaries for wildlife habitats. Freshkills Park is managing to do both and is following in the footsteps of some successful predecessors at home and abroad.

A lesser known, but successful example of land reclamation and landfill remediation can be found in the lush Mahim Nature Park, also referred to as Maharashtra Nature Park, in the Maharashtra region of Mumbai, India’s capital and its most populous city. The 37-acre park began its conversion from a landfill around 1976 by the World Wildlife Fund of India. Like Freshkills Park, Maharashtra Nature Park is located along a river – the Mithi – and for years received municipal solid waste from the surrounding region.

City streets just outside of the Nature Park. Courtesy of Redgeo via Panoramio

After nearly 20 years of remediation, it was opened to the general public in 1994. Now the park supports an abundant evergreen mangrove forest of over 18,000 trees and serves as the thriving home to hundreds of plant and wildlife species ranging from birds to butterflies and spiders, and a variety of reptiles and amphibians. The park’s great success, as noted by the managing director, is its ability to curtail urban encroachment and bring a natural environment to Dharavi, Asia’s largest slum. In turn, it provides a wildlife refuge that also serves an educational purpose for its visitors and a recreational space for environmentalists and bird watchers.

Environmentalist and project coordinator Shanta Chatterji, who was the Chairperson of WWF when the project came to fruition, favors a hands-off approach to the park’s continued development. The activities permitted within the park are limited as an effort to sustain the delicate ecological balance. At Maharashtra Nature Park, an effort has been made for preservation to take precedence over environmental tourism.

At least, this was the case until a recent push to expand the park’s attractiveness as a tourist destination came into play. The Times of India reports that the challenge now faced by the park is the encroachment of development – the potential to capitalize on this, by commercial standards, undeveloped piece of land. On the one hand, this development is meant to spur an engagement between the people of Mumbai and the park. On the other hand – and the potentially more nuanced side of this argument – the necessity to maintain the wildness of the park and protect its natural state against built changes is vital to a city densely choked with urban development.

As reported by the Times of India, Chatterji warns that any changes would be “a step in the wrong direction” – the general consensus among activists being a fear of disturbing the environmental integrity and biodiversity of the park for the sake of changes that would attract more tourism.

The challenge faced by Maharashtra is one faced by parks and wildlife in all urban areas. Threat of encroachment and the destruction of natural environments and delicate ecologies is a major concern. At Freshkills Park, the conversion of landfill to park has its own unique set of delicate balances from coordinating with the Department of Sanitation and the Environmental Protection Agency to working with the community to bring the best possible scenario: one that addresses the safety of park goers, the protection of the environment, and the satisfaction of the community. 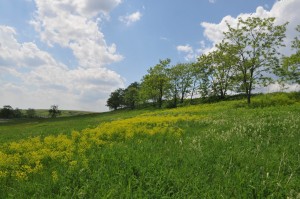 Between the mounds formed by decades’ worth of NYC’s garbage are lowland areas particularly ripe for development. This unique juxtaposition allows for the park to be developed in zones. Areas like the mounds are protected and preserved for natural habitat reclamation. Off-mound areas, like the Confluence, provide ample space for a concentration of development including public art installations and concessions. The Draft Master Plan for Freshkills Park shows the evolution of the landscape as it re-stabilizes its natural ecology to support biodiversity and low impact recreational uses. 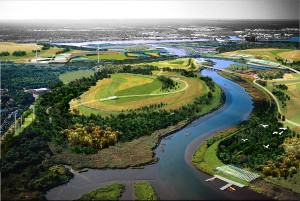 At 2.5 times the size of Central Park, Freshkills Park is a unique opportunity for New York City. The expansive 2,200-acre site comprises fields and meadows of highlands and lowlands, bound by naturally occurring wetlands that provide a getaway from the dense urban environment with a thriving ecology. Its size and diversity grants the park the chance to adopt a multifaceted approach.

In its conception, the park is part recreation, part preservation and part energy provider. Its open areas provide for a variety of passive recreation, its meandering creeks allow for active recreation such as kayaking, its preserved natural wetlands permit future generations to observe and learn from the environment, and its historic use as a landfill provides natural gas used to heat thousands of Staten Island homes as well as lessons on waste responsibility for a better urban future.

Struggling for this balance is inherent in the nature of this endeavor: converting a landfill that is the product of the consumption generated by urban development into a nature park. It requires us to define the limits of the urban environment, while creating guidelines for our engagement with and control of our natural environment.