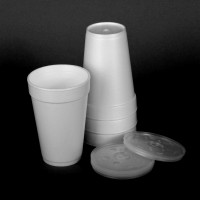 At around 95% air, Expanded Polystyrene foam (EPS) is incredibly buoyant, which is why it was used by the U.S. Coast Guard to build a six-person life raft in 1942.

2015 marks a change in New York City’s relationship with foam. On July 1, NYC banned the sale distribution, or use of EPS, announcing that businesses, agencies, and institutions in the five boroughs have until January 1, 2016 to use up their inventory. After that, they will no longer be able to sell, use, or distribute single-use Styrofoam items.

The foam ban represents a new path in waste management. While Styrofoam is recyclable, New York City determined that the material could not be recycled in a manner that is environmentally effective, economically feasible, and safe for employees. EPS needs to be processed separately from other recyclables, and if even one foam takeout container makes its way into a recycling or organics stream, the whole stream is considered contaminated and sent to a landfill. And while it takes a cardboard box about two months to decompose, Styrofoam coffee cups take more than a million years.

It’s estimated that the decision to ban EPS in New York City will remove nearly 30,000 tons of expanded polystyrene waste from landfills, streets and waterways. Since its invention in the 1940s, Styrofoam has made it easier to float, but cities like New York, Seattle, and Washington D.C. are deciding to return to shore.