From boxed rice to a can of soup, our food comes in packaging that is designed to be disposed of; even produce at some stores is offered in pre-packaged, cling-filmed trays. While it is encouraged that we recycle as much of these disposable packaging materials as possible (including the plastic wrap!), the amount of waste produced by our grocery shopping experiences is staggering, contributing 32% to our overall household waste.

A rising generation of supermarkets is looking to change all of that, however. During the summer of 2012, a small grocery store named in.gredients™ opened in Austin, TX that has touted a policy of reducing waste wherever it can, especially in the area of disposable packaging and pre-prepared foods. Now, a store in Berlin called Original Unverpackt, which will be opening this summer, takes it a step further by not offering any products that come pre-packaged. Both stores rely on a model that focuses on local farm produce and meat to reduce the carbon costs of transport and packaging, as well as bulk dry goods that can be dispensed into reusable containers. 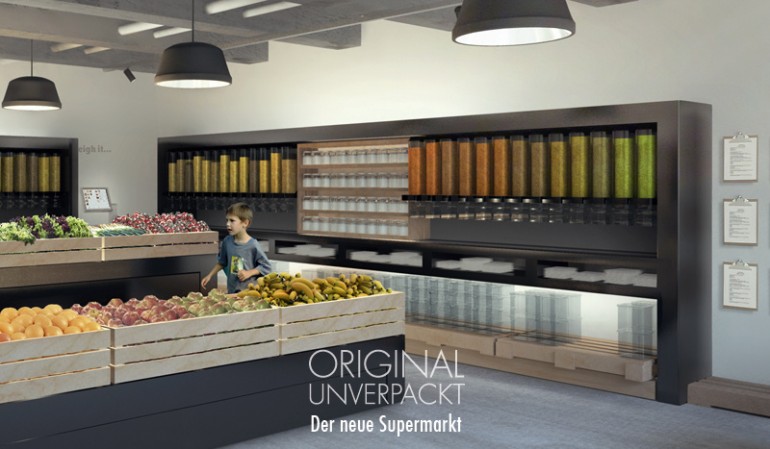 The concept that these stores have adopted are radical in modern food shopping. Not only are we separated by the production of food by hundreds – sometimes thousands – of miles, but we are also creating an unprecedented amount of waste transporting and packaging the food. Modern grocery stores throughout developed countries have built their model on easily-obtained, easy-to-make/ready-to-eat food products which requires that the food be pre-packaged. Again, to our fortune, many forms of disposable packaging are now recyclable, but much of it still ends up in our landfills or – worse yet – on streets, beaches, and natural areas as litter. The question is can we live without this type of food shopping and move to a waste-free shopping experience?

The founders of in.gredients™ and Orignial Unverpackt believe we can. Beyond that, they believe that plenty of people want to live that way as well. They may be correct in that assumption, as both stores have relied on crowdfunding to get their start, and their fundraising goals were exceeded well before the deadline was reached. As we become more informed about what it is we can do on a daily basis to lessen our impact on the planet, the ideas and concepts that these two grocery stores have outlined are likely to spread. We are beginning to see a movement away from plastic and paper bags by both stores and states incentivizing the use of reusable totes. It seems like a natural pathway to follow those actions with a reduction in disposable food packaging.