I Am Within/I Am Without

I Am Within/I Am Without was a temporary performance and installation at Freshkills Park in September-October 2011 by artist DB Lampman.

I Am Within consisted of three large scale human figurative sculptures atop the northern landfill mound, the capping and closure of which was completed by the New York City Department in Sanitation in 1996. The figures, made of metal, plastic, and fabrics, have multiple limbs extending from their arms and heads that rise upwards toward the sky and then bend back down toward the earth. The metal was left untreated so it rusted and bled through the fabric, changing its color as part of a natural process of deterioration during the period that it was installed at the park.

During the performance event on September 17, the artist wore a giant, unwieldy headdress that mimicked the shape of the sculptures. Unlike the sculptures, the heavy arms did not tether her to the ground. Instead, they rose upwards, suggesting balloons, as if at any moment she would float away into the sky. However, the harness was noticeably very heavy and hard to carry, so any hope of flight was diminished. Instead, she moved among the sculptures imitating their movements, eventually shedding the heavy weight and walking away leaving it as an empty shell next to the sculptures. 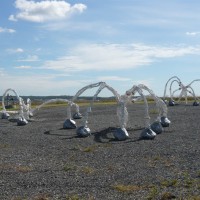 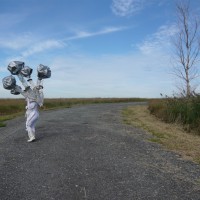 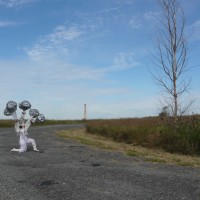 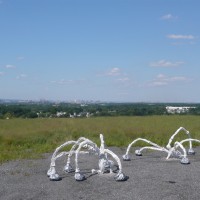 I Am Within is about our connection to the earth and to each other. The sculptural figures and the accompanying performance represent the dual hope and futility of mankind’s intervention with nature. They are reaching out in hopes of mobility, but the multiple limbs serve only to tether the figures to the earth and tangle them in their own folly. In an interview with Staten Island Arts, she explained that “the inspiration for ‘I Am Within’ came from a continued exploration into the theme of how we, or more specifically, I, shape my environment by how I occupy it.  It is interesting to me to see how sculptural form alters the space that it occupies, and conversely, how the environment that it is in alters the art or the art experience.”