The trees are bare and snow flurries have started, signs that the heart of winter is approaching. As we brace for frigid temperatures and layers upon layers of clothes, it is hard to imagine this weather could be favorable for wildlife. However, cold and blustery are perfect conditions for birds that breed at higher latitudes that make their way to our area to escape the even harsher Arctic winters. Wintertime at Freshkills Park hosts species that we generally only see from December through February. The annual Christmas Bird Count is around the corner —and in preparation, we highlight a few of our winter birds. 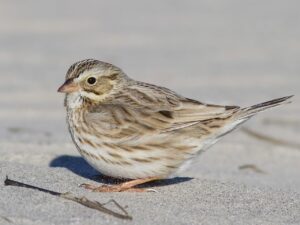 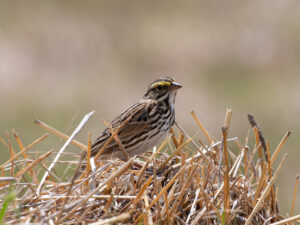 Horned Lark (Eremophila alpestris) – Horned Larks are named for their tiny horn-like tufts of feathers on top of their head. This species is sexually dimorphic, meaning that the males and females differ in appearance. Though similar in size, males have a bright yellow on their head with a black mask. Females lack a mask, and have more subtle yellow tones than the males.   Although we find Horned Larks in the spring and summer at Freshkills Park, we most commonly see them in large flocks from October–April, with the largest numbers being found from December–March.

Snow Bunting (Plectrophenax nivalis) – Snow Buntings are striking black and white birds that breed in cold, rocky crevices in the Canadian Arctic. They arrive at Freshkills Park in late-fall and spend the winter foraging in small flocks in the mowed vegetation on each of the former landfill mounds. The males depart our area in early-spring to return to their Arctic breeding grounds to establish breeding territories, while the females arrive a few weeks later.

Fox Sparrow (Passerella iliaca) – Fox Sparrows are large sparrows that can be found foraging on seeds, plant material, and insects in leaf litter or in thickets around Freshkills Park. In the eastern United States, Fox Sparrows are reddish in color, with bold streaking with a gray face and nape. They breed in Canada and Alaska and arrive at Freshkills Park in late fall.

Lapland Longspur (Calcarius lapponicus) – Lapland Longspurs are an uncommon, but annual visitor to Freshkills Park. They breed in the High Arctic in tundra habitat. They superficially resemble sparrows but are more closely related to Old World Finches. The name “longspur” refers to their long hind claws. While they are likely one of the most abundant breeding birds in North America, many of us will only see this species after it migrates south for the winter. At Freshkills Park, we find Lapland Longspurs foraging in small flocks on the gravel roads or mixed with larger flocks of Horned Larks and Snow Buntings.