Summer 2014 has been quite moderate compared to other humid, sweat-drenched days of summer past. However, this relatively mild summer may just be an outlier. According to Climate-Central, not-for-profit climate research think tank, urban areas have increased their summertime temperatures an average of 2f during the day and 4f overnight. Cities in the United States tend to be about 17f warmer than rural areas. What causes this phenomenon? The presence of asphalt, black roofs, or manmade material that is not reflective tends to absorb heat from the sun and slowly release it at night. A comparison between urban forested regions is most noticeable at night because of the slow heat release of non-reflective materials in the city.

Have you ever noticed the nightly weather report on local news on some summer nights the thermometer will read 80f in Midtown at 11p while the upper Hudson Valley dips into the 60s? This is because New York’s Central Business District is stacked high with concrete buildings and surfaced with sidewalk and asphalt. During the day as the sun hits those surfaces they absorb the solar rays (heat) and slowly release it at night. Up in the Hudson Valley most surfaces are vegetated with trees or grass and human made structures are few and spaced out. Therefore, the amount of heat being released at night is minimal, which accounts for the large differences in nighttime temperatures between the city and surrounding rural areas. 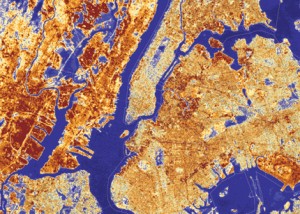 Thermal image centered on New York Harbor, the hotter the surface the deeper the red, cooler surfaces such as water and parks are blue.

The urban-heat-island effect has a huge impact on the 80% of Americans who live in urban areas. As the climate warms, we are seeing higher average temperatures in summer that have an effect on those who are most vulnerable, particularly the elderly and young. It is predicted that deaths from an increase in median temperature in New York will increase 5.3%-6.2% by the 2020s; already the average temperature rose 3.6f in Central Park between 1901 and 2000. The risk also extends to the electrical-grid which is still recovering from Hurricane Sandy. During heat-waves the demand for electricity spikes as homes, businesses and institutions turn on air conditioners seeking relief. This can cause ‘brownouts’ or a voltage reduction. One such event occurred in the summer of 2012 and affected over 100,000 customers in Brooklyn and Queens. Brownouts can negatively affect the lights, water heaters and some motors.

There are however, several steps that the government is taking to subsidize green infrastructure that mitigates the impacts of the urban-heat-island effect and climate change. Black rooftops in New York canreach a staggering 140f on the hottest of summer days, because the color black has a solar reflectance of 0. Green roofs, or rooftops with vegetation lower a buildings’ cooling costs because plants deflect heat from being absorbed, the same is true for white roofs. 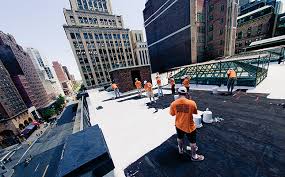 There are incentive programs that offer property tax abatements for green roofs and the city offers reflective white paint through its cool roofs program. If implemented en mass, the government-sponsored initiatives can help mitigate the consequences of a warming climate and the increasing intensity of the urban heat island effect.