From Behind the Mounds: Animal Grazing for Invasive Species 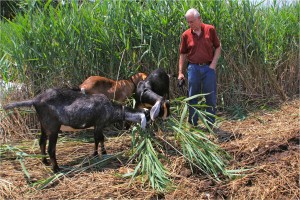 At Freshkills Park, conquering rapid growing invasive plants is no simple task. For a human it may be daunting manual labor, but for goats and sheep, it’s just lunchtime. Two years ago, Freshkills Park enlisted the assistance of goats with large appetites to clear a portion of phragmites on site. News coverage spanned multiple publications speaking to the innovation of this plan.

Two years later, the trend of “contract goats” is catching on. A recent New York Times piece shares the story of a livestock manager in Sleepy Hollow, New York who manages a herd of 50 ewes at Rockefeller State Park Preserve. While the article calls this an experiment in land management; the ewes on a rotating basis each eat a fraction of an acre of grass and “nuisance plants” to improve the health of the soil.

Growing popularity for contract grazing has stemmed from the rising costs of farmland ownership and maintenance. According to the New York Times, the average acre of farmland in the Northeast costs $4,840 to maintain, and this figure is increasing every year according to a report from the U.S Department of Agriculture. Using livestock drives down maintenance costs and creates viable farmland that invasives may have prevented before the use of contracted livestock. 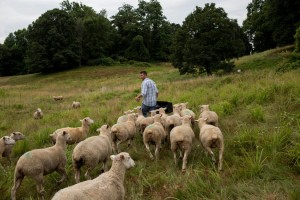 However, in other parts of the country where public land could also use the help of contracted livestock grazing; these hungry goats and sheep are not as welcome as they are in Sleepy Hollow and Freshkills Park. The New York Times also covered a story in the Detroit, Michigan neighborhood of Brightmoor. Hedge fund manager Mark Spitznagel and his volunteer goats have received push back from the city. As a large promoter of urban farming and renewal, Spitznagel wants to use his herd of goats to graze abandoned plots in the Detroit area. However, he has run into several issues with local animal control threatening to remove the goats from his care for trespassing. There is a city ordinance in place that prohibits animals from grazing on public land. Spitznagel hopes to have the city overturn the ordinance so that he can deploy more goats into the area which can be managed by multiple people– creating local jobs. 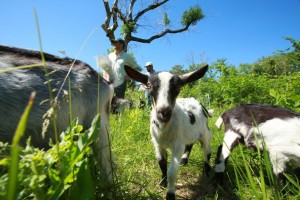 Slowly, contract grazing is becoming a recognized clean alternative to invasive removal and control while contributing to our eco-system through soil reclamation and giving back to the food-chain by giving many hungry goats a hearty meal.