From Behind the Mounds: Aerial Balloon Mapping 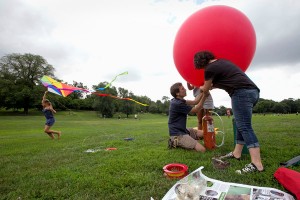 Mr. Diegel filling a balloon with helium. The balloon, sent over the watershed, carries cameras that photograph the landscape from above. Credit Dave Sanders for The New York Times

Last week, a New York Times article featured the work of one man, Eymund Diegel, and his hydrology studies of the Gowanus Canal. One of the tools he employed was aerial mapping using a helium-inflated balloon with a handheld camera attached. Mr. Diegel has used this technique to gain insight into the Gowanus watershed, stitching the resultant photographs into a useful map that can assist officials in their strategy-making sessions on how to address the environmental problems associated with the Gowanus Canal.

This tactic has been making its own headway into Freshkills Park. Last year, a big red balloon drifted over the North Mound at Sneak ‘Peak,’ gathering images over the mound. Led by Nick Johnson, a research scientist at the Center for Urban Science and Progress (CUSP) and Public Lab member, the idea was to see what the aerial mapping could pick up that would be of interest to researchers of closed landfills. Knowing that there was interest for the balloon mapping to return to this year’s Sneak ‘Peak,’ Freshkills Park staff collaborated on how balloon mapping might benefit the park long term.

One of the Freshkills Park interns had recently proposed a research project that looked would look into management strategies the park could implement for invasive plants. The idea of using the balloon mapping to track the spread of one particular species, Phragmites australis, was suggested to CUSP and received a positive response. A trial run was conducted early in July by Freshkills Park staff and CUSP staff, both to determine the feasibility of aerial mapping at different sites within the park, and to see if Phragmites would be distinguishable from a vantage point 500 feet in the air. 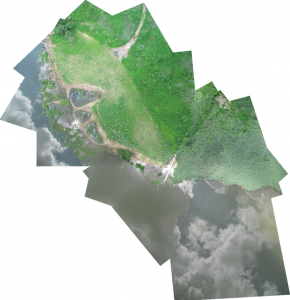 Map stitched together by Nick Johnson depicting the North Park Wetland Restoration site. Phragmites is visible as the big lime-green patch in the lower righthand portion of the map. Other patches of Phragmites are visible along the map edges.

The results were amazing. The camera balloon captured clear photographs that were then stitched together by Nick into a map that unmistakably showed the extent of Phragmites growth. The Phragmites’ unique shade of lime-green stands out against all other shades of green in the park. Due to the success of this trial run, it is hoped that aerial balloon mapping can be used on at least a quarterly basis to track the spread of Phragmites in areas of specific management interest in Freshkills Park.

Aerial mapping promises to be a great tool in a management strategy aimed at reducing the coverage and invasion of Phragmites. Done frequently enough, officials here at Freshkills Park will be able to determine the effectiveness of the management strategy. Aerial maps can be used to track the success – or failure – of the plan and staff can make changes accordingly. Aerial mapping as a tool is being used in a growing number of environmental management plans, including at the EPA where it is used to track water flows. The promise of this technique to effectively inform decision-makers cannot be overstated. Keep an eye out for the continued use of aerial mapping at Freshkills Park, including at Sneak ‘Peak’ on the 28th!