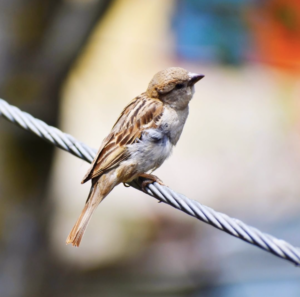 Did you know that there are over 35 species of sparrows throughout North America?  About a third of the species are fairly common throughout the continent.  The most common and easily recognized sparrow is the House Sparrow.  They are native to Eurasia and northern Africa and were introduced into Central Park in 1850.  They prefer to live in urban areas over undisturbed habitats.  When in urban areas, they may outcompete native birds for territory and resources.  By restoring and establishing endangered habitats we can help native species thrive, even in an “urban” setting like New York City.

Freshkills Park is home to a variety of Sparrows, including the state-threatened Grasshopper Sparrow.  Freshkills Park is also home to Song, Savannah, White-crowned and Chipping Sparrows.  These different sparrows can be identified by defining characteristics like color, nesting habits and their distinct songs. 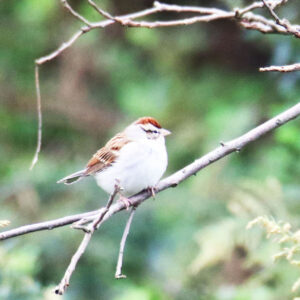 The Chipping Sparrow (Spizella passerine) is a fairly common sparrow across North America.  They originally inhabited pine woods but have adapted to a variety of landscapes.  During the 1900s, they were fairly common in cities and towns, until the introduction of the House Sparrow.  Chipping Sparrows are usually long-distance migrators, traveling in flocks.  One of their defining characteristics is their rust colored crown.  Their crowns are crisper and more vibrant in the summer, and more subdued in the winter.  They are typically ground foragers but will occasionally snatch insects out of the air.  In addition, they usually prefer to nest and sing in evergreen trees but can sometimes be found in other trees or the ground.  Chipping Sparrows are named because they typically communicate through singular chips, and the males sing using identical, “almost mechanical-sounding” chips. 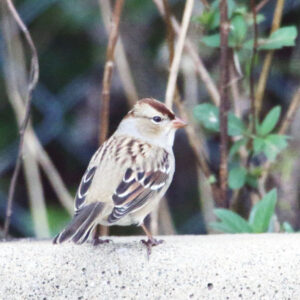 The White-Crowned Sparrow (Zonotrichia leucophrys) is more common in the West and is an uncommon migrant in the East.  They are typically found in shrubs and low foliage; however, their nesting practices vary by region.  In North America, nests are found near the base of shrubs or clumps of grass.  In Western populations nests can be found in the shrub and off the ground.  The most notable regional differences are the male’s songs, which act as local dialects.  Males learn their songs in their first few months based on the songs and sounds they hear.  A male on the border of two populations can sometimes learn dual dialects.  These unique dialects are one reason their songs are so intensely studied.  The adults are visibly recognizable by the white and black stripes on their crown, the juveniles (as pictured) have brown and white stripes.  They can be spotted usually hopping and running on the ground. 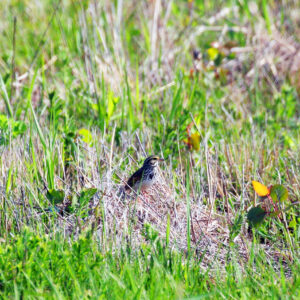 The Savannah Sparrow (Passerculus sandwichensis) is common in North American grasslands, there are a handful of notable subspecies including the “Ipswich” and “Belding’s” Savannah Sparrows, which inhabit beaches and salt marshes respectively.  While overall the species is abundant, populations that nest in salt marshes are vulnerable to loss of habitats.  Their nests can be found on the ground and in low grasses.  They can usually be spotted perched on a post, weed or fence.  While perched, the males will sing a three-part song with a mix of high and insect-like notes lasting a few seconds.  Like most grassland birds, flights are brief and kept close to the ground.  Savannah Sparrows can be recognized by the yellow around the eyes. 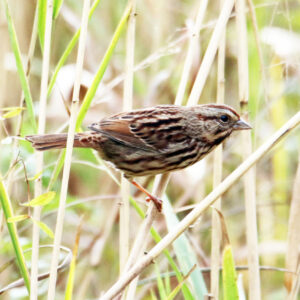 The Song Sparrow (Melospiza melodia) can be found throughout North America, with 24 regional subspecies being recognized by scientists. With a mix of brown and gray plumage, northern variants are typically darker, and the southern variants are usually paler.  The Song Sparrows of Alaska are even noticeably larger than other subspecies.  Despite these visible differences, there is little genetic variation across subspecies.  Song Sparrows prefer to live in shrubs, thickets, well vegetated spaces, dense low ground cover and open woodlands.  They typically stay in dense cover, but when they do fly, they have a recognizable downward pumping of their tale.  When attracting a mate, males will sing from exposed low branches.  The females select a mate based on how well the male learned from their tutor and the number of components to the song.  Their songs will consist of 2-6 phrases, with varied tempo and pitch, lasting about 4 seconds. 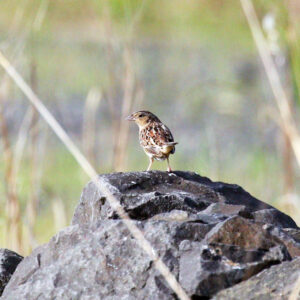 The Grasshopper Sparrow (Ammodramus savannarum) is one of the more endangered sparrow species found at Freshkills Park, a species found more commonly in the East.  Grasshopper Sparrows prefer habitat in grasslands and prairies which are endangered habitats, with less than 2% of our original grasslands left.  The tall grasses at Freshkills Park, particularly on East Mound, have provided a necessary nesting location for these migratory birds within the last few years.  Grasshopper Sparrows are appropriately named for the insect-like songs that the males sing.  Unlike most North American sparrows, the males have two distinct songs; the common song is dry with a grasshopper like buzz, while in flight the song is more musical and squeakier.  These sparrows are often heard and not seen.  They run along the ground through tall grasses and when they sing, they prefer low exposed areas.  Their coloring is grown and tan, with subtle markings like white around their eyes and a small patch of yellow near the eye.

Next time you see a little brown bird around the city,  look closely, it just may be a native sparrow.  While watching birds, have you ever wondered why they act a certain way?  Learn how to observe and record local wildlife behavior with an ethogram.   Share  your sparrow pictures with us online using #BirdsOfFreshkills