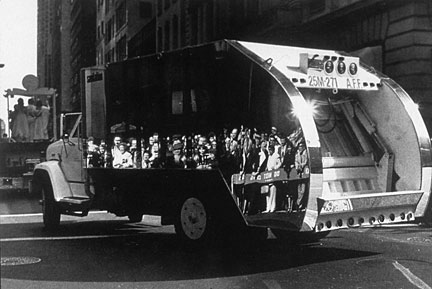 If you’ve been to Sneak Peak, perhaps you’ve noticed your own reflection in the side of a Department of Sanitation garbage truck.

This 20 cubic-yard garbage truck faced with hand-tempered mirror is The Social Mirror by artist Mierle Laderman Ukeles. The Social Mirror debuted in the grand finale of the first NYC Art Parade in 1983 and was most recently exhibited at the 2007 Armory Show. According to Ukeles, “This project allowed citizens to see themselves linked with the handlers of their waste.”

Since publishing Manifesto for Maintenance Art, 1969!, Ukeles’s work has revolved around the role of the artist and our relationship to maintenance and service work, and most importantly the workers who perform these essential, everyday tasks for the rest of society. She has worked as the first and only official artist-in-residence for the New York City Department of Sanitation since 1977, where her projects have included Touch Sanitation (1978-1984) and Flow City (1983-1996) .

Not surprisingly, Ukeles has also played an important role in the Freshkills Park project, advocating for a public park on the site since 1989. She has produced several gallery installations on Freshkills and was a contributor to the Draft Master Plan for the park. Ukeles is currently designing a permanent nature viewing platform and two related earth works in South Park as part of the City’s Percent for Art program.

Find out more about maintenance art and Mierle Laderman Ukeles’s work in this video from the 2011 Creative Time Summit.