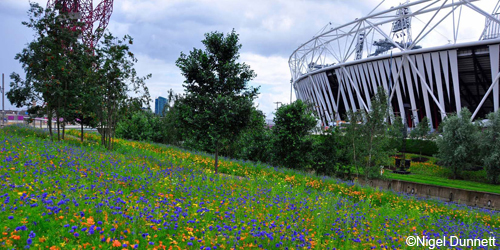 Though the 2012 Olympic Games have come to a close, the landscape of London’s East End has been dramatically transformed for the long-term utilizing a ecologically-based design approach that has much in common with the Freshkills Park master plan.

According to The Dirt, nearly 250 acres of formerly-industrial land were turned into a beautiful setting for the Olympic venues inspired by Victorian and post-war English pleasure and festival gardens. The landscape design, by LDA Design and Hargreaves Associates, incorporated hillocks with views of the surrounding city, stormwater management practices including bioswales and rain gardens, and new bio-habitats such as wildflower meadows, wetlands, and wet and dry woodlands. The site designers even had an Olympic Park Biodiversity Action Plan to attract native species like kingfisher, sandmartin, and European eel! The River Lea, which flows through the site, was previously canalized, but now benefits from wider, more natural banks. All of these designed landscape improvements contributed to the 2012 Olympics being heralded as the most sustainable Olympic Games yet.

Many of the same types of interventions are being incorporated into Freshkills Park, as the former landfill site is transformed into an expanse of rolling hills and restored woodlands and wetlands.  Many of the native flora and fauna have already begun to return to the site!

The Olympic site in London will now be converted to public park land. James Corner Field Operations (the landscape architecture firm that created the master plan for Freshkills Park) has re-designed a 55 acre piece of the new public park, set to open in 2014 as Queen Elizabeth Olympic Park. According to inhabitat.com:

The redesigned Olympic Park will include a 12-metre wide tree-lined promenade that will open up to a series of outdoor “rooms”, separated by tall grasses. These active spaces will host a classic carousel, an amphitheater and a play space with a climbing wall. There will also be spaces reserved for picnics, concerts and other events.

The design also includes the addition of variety of trees and plants native to the local area, with planting and horticulture by Piet Oudolf, who also lent his design talents to The Highline