Dallas’ newest park to be perched atop a highway 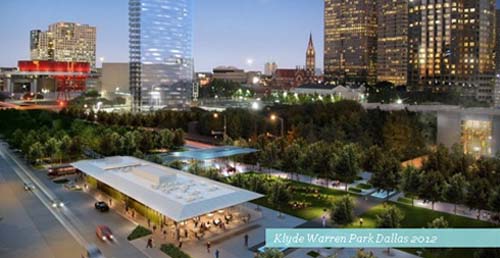 Dallas’s plan for a new park

After the success of The Highline in New York, it seems that every city is now attempting to transform abandoned or underused public spaces into lush urban parks. Treehugger has reported on the recent developments in unusually located parks, the latest being the Klyde Warren Park in Dallas, Texas. The 5.2 park, which is set to open this fall, is currently being constructed over a busy highway. The park itself will be built upon a deck-like structure, providing the surrounding neighborhood, and the city at large, with much needed public recreation spaces, including a pedestrian promenade, gardens, restaurants and performance pavilions.

While Klyde Warren Park represents Dallas’ admirable commitment to the revitalization and creation of urban green space, Treehugger duly notes that an even more enivronmentally and innovative friendly plan would have been if the city of Dallas had opted to convert the entire highway into a park, as they have done in Seoul, Korea.