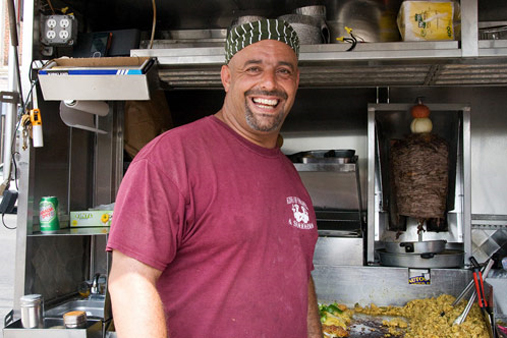 This week we’re featuring some of the awesome offerings we’ll have on hand at this coming Sunday’s Sneak Peak at Freshkills Park.  First up: The King of Falafel & Shawarma, Fares “Freddy” Zeidais.  Freddy’s already high stock rose even more this past weekend, when he WON THE VENDY CUP at the 2010 Vendy Awards on Governor’s Island (the annual street vendor awards ceremony held by the Street Vendor Project of the Urban Justice Center)!  For reference, this is the sixth year of the awards and Freddy’s third nomination—that’s how good his food is!  His cart, normally located at 30th Street and Broadway in Astoria, Queens, also won the attendee-voted People’s Taste Award.  We are seriously excited that he’s going to be serving up his famous falafel, shawarma, chicken with rice and more at Sneak Peak.