Imagining an NYC park in an underground vestige 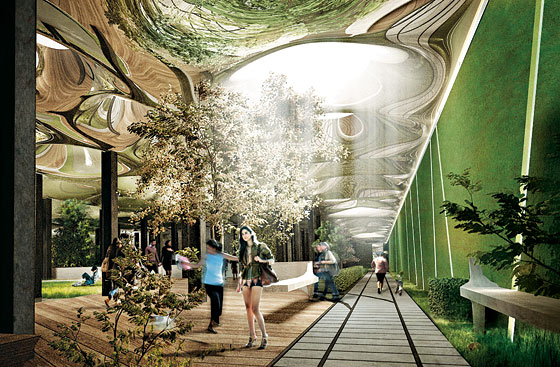 With landscape architects riding a wave of creative post-industrial reimagination in New York City–rail lines, concrete plants and landfills are all turning green–it was perhaps inevitable that underground park spaces were next. And so it goes that a team of design speculators have taken on the challenge of re-envisioning the Lower East Side’s former Williamsburg Bridge Trolley Terminal as a sun-lit subterranean park, dubbed “The Delancey Underground.”  Dan Barasch of  PopTech, James Ramsey of RAAD Studio, and R. Boykin Curry IV recently revealed their plan for the project at a local community board meeting and have set blogs a-buzzing with their tantalizing renderings. The team’s vision for transforming the long-abandoned two-acre trolley terminal into an urban oasis includes fiber optic “remote skylights”, greenery, pools, picnic areas and public art.

While questions of security and maintenance loom large in considering this proposal, the team, which has not yet secured funding or MTA support for the project, have made an appealing and provocative case for the provision of more one-of-a-kind public spaces, especially in the very modest portfolio of parks on the Lower East Side.

(via the Architect’s Newspaper)