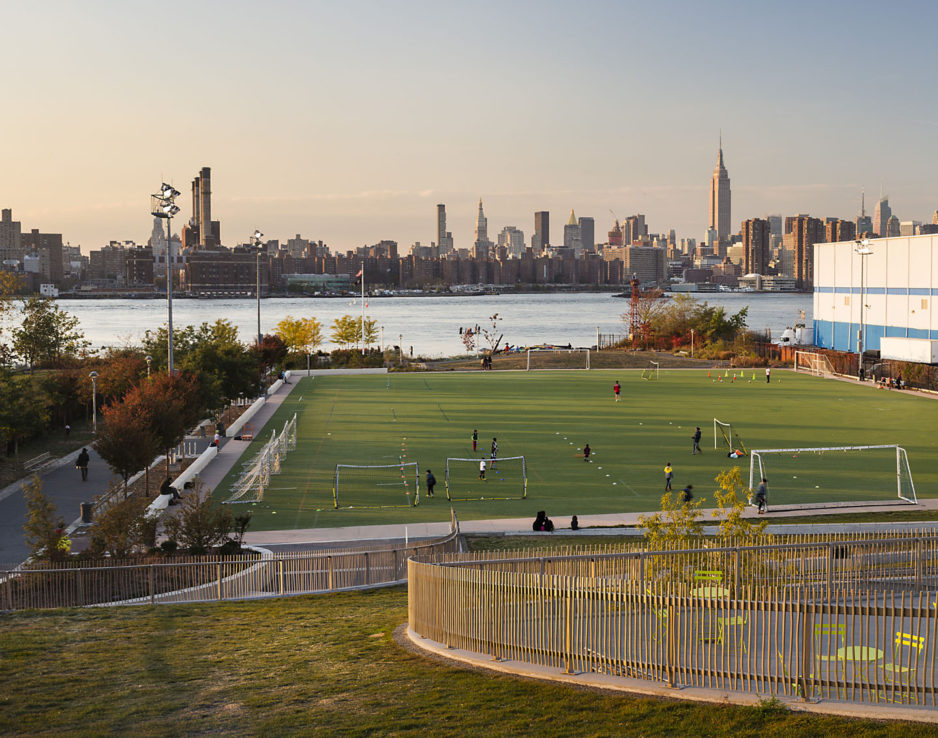 In November 2016, Mayor de Blasio reached an agreement to acquire the 11-acre CitiStorage site on the Williamsburg waterfront for $160 million. This parcel was the final piece needed to complete the 27-acre Bushwick-Inlet Park promised to North Brooklyn residents as part of the 2005 Rezoning Action.  It has been an eleven year journey for community residents whose activism provided the critical momentum to complete the park.  It is a familiar story to many NYC residents including those in Staten Island who faced similar challenges as they struggled to close Fresh Kills Landfill.  Such successes speak to the power of community advocacy in efforts to eliminate environmental burdens and create an equitable parks system.

In 2005, in a move that both responded to and facilitated the further transformation of northern Brooklyn, the City passed a massive rezoning action that allowed the construction of residential high rises on former industrial land on the Greenpoint-Williamsburg waterfront.  Many north Brooklyn residents strongly opposed the rezoning because of concerns about displacement, loss of access to the waterfront, loss of neighborhood character, and lack of services.  At the same time, residents wanted to address a half century of environmental impacts related to municipal power stations, waste transfer stations and a large sewage treatment plant.  After losing a battle to halt the rezoning, community groups ensured that the Greenpoint-Williamsburg rezoning action included a commitment to construct Bushwick Inlet Park.

Assemblage of the parcels and construction of the Bushwick-Inlet Park was a complex process taking a significant amount of time.  Portions of the Park were obtained by eminent domain in 2007 and by 2013, about half of the Park had been acquired.  It was, however, the 11 acre Citi Storage parcel owned by Norm Brodsky that eluded the City’s reach.  Ironically, it was the rezoning and the promise of the Park that drove up the value of the property and led to disagreements over the sale price.  The City initially offered $100 million but was rebuffed by Mr. Brodsky, who claimed the property was worth $325 million. Finally, on November 21, 2016, after eleven years of community activism and rallies (including a sleep-in outside the park in a rainstorm) Mayor De Blasio reached an agreement to acquire the Citi Storage parcel and complete Bushwick Inlet Park.

As sites of municipal waste infrastructure, Greenpoint and Williamsburg faced the same pressures as Staten Island when it hosted the world’s largest landfill.  The Fresh Kills Landfill was a blight on the neighborhoods and commercial establishments surrounding its 2,200 acre footprint.  Communities organized in Staten Island just as they did in north Brooklyn, and after years of intense activism, regulations paved the way for landfill closure in 2001. Now, community voices are playing a role in the build out of Freshkills Park, expressing ideas for active and passive recreation in South Park.

Just as the creation of Bushwick Inlet Park is transforming the Greenpoint-Williamsburg waterfront, the creation of Freshkills Park is creating an ecological and social asset on Staten Island’s west shore. The full realization of these two projects are inspiring milestones that would not have happened without the dedicated community organizations that rallied the City to improve the quality of life for all NYC residents.