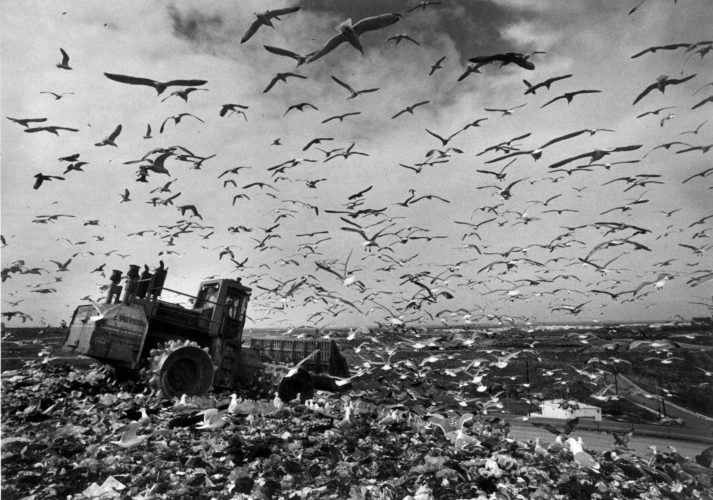 Birds fly over the piles of garbage at the Fresh Kills Landfill in 1993. Image courtesy of the Staten Island Advance and Staten Island Institute Archives.

Starting September 22, the Freshkills Park: Landscape in Motion photography exhibition will be on display at the Staten Island Arts Culture Lounge. The collection of historical and contemporary photographs will illustrate the transformation of the Fresh Kills Landfill on the Island’s West Shore to a public park.

When New York City’s “Master Builder,” Robert Moses, established a landfill in 1948 on the tidal wetlands and coastal marshes of Staten Island’s West Shore, he saw it as a temporary solution to waste management with long-term development benefits. He had proposed to fill the wetlands with trash for three years to create stable ground for new housing. Instead, Fresh Kills Landfill became the largest landfill in the world and operated for 53 years before it closed in 2001. The site is now becoming Freshkills Park – 2,200 acres of wetlands, creeks, and expansive meadows atop landfill infrastructure – an unusual combination of natural and engineered beauty, evolving over the next two decades.

While this astounding ecological renewal proceeds, the majority of the park interior remains closed to the public with the exception of recreational, cultural, educational and research activities managed by NYC Parks with support from the Freshkills Park Alliance and the NYC Department of Sanitation. Tours for photographers have become a staple of those offerings, including “A Fresh Look,” a photography contest organized by Freshkills Park with the Staten Island Advance in July 2016, the entries of which will be on display.

Photography has become an important part of tracking, processing, and responding to the changes at Freshkills over time. Although the shift from landfill to park is subtle and slow, anticipatory images capture the current moment and reveal potential in this grand landscape. Explore the evolution of this place from its pre-landfill state through its current stride, and imagine its future as it is progressively reclaimed.

This exhibit is presented by Staten Island Arts and supported by Freshkills Park and the City of New York; NYC Councilmember Debi Rose; by public funds from the New York City Department of Cultural Affairs in partnership with the City Council; New York State Council on the Arts with the support of Governor Andrew M. Cuomo and the New York State Legislature; the Staten Island Advance; Collection of the Staten Island Museum; Duggal Visual Solutions; Jarred Sutton; Tri-Lox; IrisVR; and our artist, individual, family, and business members.