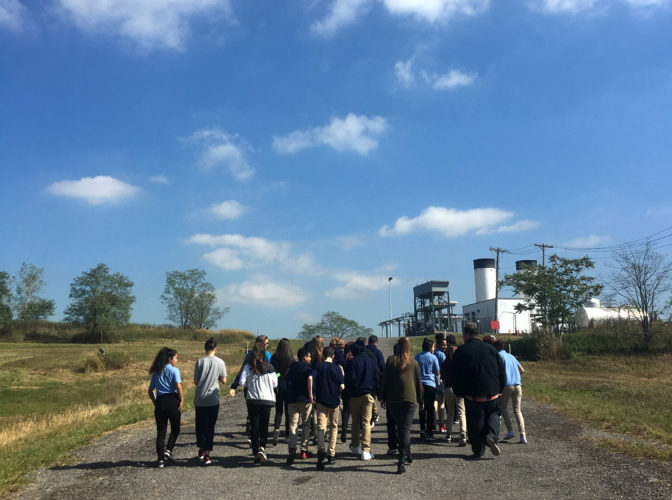 One hot day this past October, a student told me, “Well, our waste has to go somewhere. It’s selfish, but we don’t want it here. It’s not our problem.”

He was one of 16 high school students on a field trip to Freshkills Park. I led them on a short hike to the top of North Park, a capped mound of waste 135 feet above sea level. The activities I had planned for the group explored the global nature of our modern waste management system. This particular comment was a reflection on an activity called “Where in the world is away?” that asked students to trace the journey of American e-waste using data from the MONiTOUR e-trash transparency project.

One LCD TV was donated to a Goodwill in Pittsfield, Massachusetts. Over the course of 296 days this TV traveled from Western Massachusetts to Ohio and then Los Angeles. The TV then landed in Tuen Mun, Hong Kong. After it arrived in Tuen Mun, it quickly moved to a recycling yard in an unknown location. The last GPS signal was near Wengyuan, China. Commentary on the MONiTOUR site says this TV is most likely in transit to another recycling yard. Several other TVs and printers had a similar fate.

The student was describing the logic of our current economy. Consistently increasing levels of consumption is a constant. Combined with a persistent cultural desire to put waste away, this means large, rural areas to house waste are constantly in demand. Many times those spaces have little socioeconomic power either on a national or global level. In New York City, our waste goes to landfills in Ohio, Pennsylvania and the Carolinas. As a country, our waste gets exported to developing nations around the world. When the interconnectedness of our environment is factored in, those unregulated waste and recycling outfits matter a lot. Not to mention the human toll these places take on workers and their families.

Considering where and how waste is managed brings Freshkills Park’s status as an “ironic sanctuary” into full view. After all, the rolling hills at Freshkills aren’t traditionally “natural.” The student who told me that waste was not our problem correctly pointed out that if we hadn’t started sending waste elsewhere, the Park would not exist.

This is the contradiction I want students to grapple with. Freshkills Park is an objectively beautiful feat of geoengineering, but the Freshkills story doesn’t end there. None of us are absolved of our garbage sins. Those familiar with Freshkills are actually endowed with greater responsibility to think critically about waste. We’re aware of how damaging methods like landfilling are to people and planet. So when students leave Freshkills Park, we don’t want their only take-away to be that Freshkills is really pretty and it doesn’t smell. We want them to ask “How can we prevent another trash mountain from forming?”

That’s the crux of Freshkills Park’s education program: how can we prepare students to successfully engage with ecological problems unique to the twenty-first century? Waste is a distinctly modern issue. It is essential, especially at a place like Freshkills, to actively discuss how our complex waste management system affects the entire planet. We also need to confront different methods for restoring ecosystems ravaged by unregulated industry. By introducing these topics at Freshkills Park, they transform from an abstraction to a reality. Students begin to feel how big these ecological problems really are.

They’re also inspired. However imperfect, Freshkills Park is one successful step towards a solution. Most students just want to know how they can help. I tell them to get involved in their communities. Tell the people making decisions that they’d like to make sustainable changes to how we manage our waste. Educate themselves. Engage in school, but also learn on their own. Find out where waste goes. Find out how it impacts those places. The first step to making a change is knowing what problem you are facing.