Farther Afield: A visit to the Black Rock Forest Consortium

In mid-December, the Freshkills Park Development Team took a trip to visit the Black Rock Forest Consortium in Cornwall, NY. The Consortium manages 3,838 acres of forest with a scientific research field station on site. The team met with Dr. Bill Schuster, Black Rock’s Executive Director, who gave an overview of the facilities at the station and the research and scientific programming taking place, and led the team on a tour into the forest to visit some of the current research sites towards fostering ideas for the future of the scientific research program at Freshkills Park. 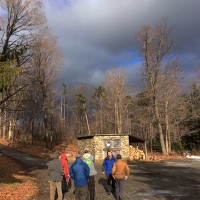 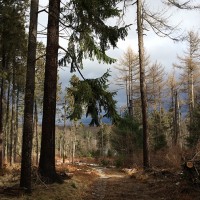 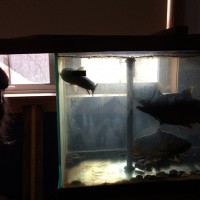 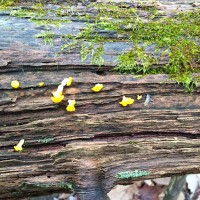 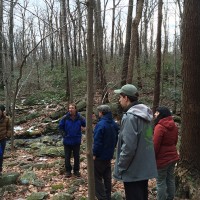 The Consortium is composed of member institutions, including NYC Parks, who as partners lead research projects and educational programming at the Forest. Black Rock Forest is a member of the Organization of Biological Field Stations and has many amenities on site that make it an attractive venue for research. There is a lodge for visiting scientists and educational groups, as well as a science center with lab space for researchers to conduct initial analyses and sample preparations, and for teachers to lead students in forest investigations. Much like the plans for Freshkills Park, the infrastructure at Black Rock Forest is very environmentally friendly: the toilet systems are all composting, the buildings are heated and cooled using a geothermal system, and solar panels provide some of the needed electrical power.

The Freshkills Park team was able to see some of the research and management projects that the Black Rock staff conduct themselves, such as a trout breeding and re-introduction program, an environmental monitoring data network, long-term tree monitoring studies, and a study that tracks new forest growth in plots of land fenced in to exclude deer. Bill was also able to share some of what they have learned in developing successful educational programming, including school field trips and a summer science camp.

The facilities and program at Black Rock are a prime example of what can be accomplished through partnerships with like-minded institutions. They have created an environment which is extremely conducive to scientific work and attracts researchers from near and far. As Freshkills Park develops, we hope to implement some of the successes of Black Rock into our own program.