A few weeks ago, my iPhone 4s slowly started to malfunction. When the battery started to die within hours of being unplugged, I thought, ‘easy fix… it needs a new battery.’ Then one day I tried to make a call but no one could hear me. Then my apps started to crash, opening and closing again and again. Restoring it to factory settings did nothing, and I tried everything in the books (that is, online forums). Maybe it was time to get a new phone. The phone itself was a hand me down and I wanted to make the best choice environmentally and financially, considering that those (my dad) willing to give me their old phones weren’t ready to part with their 5ses just yet. Faced with a dilemma, I had many questions I wanted an answer to. Do I fix my phone? Do I get a new phone and sell mine on eBay (who would want it)? Do I buy a used phone on eBay? Do I trade in my phone to the AT&T store? Or is there something totally different I can do with it? Am I just another sucker of planned obsolescence? 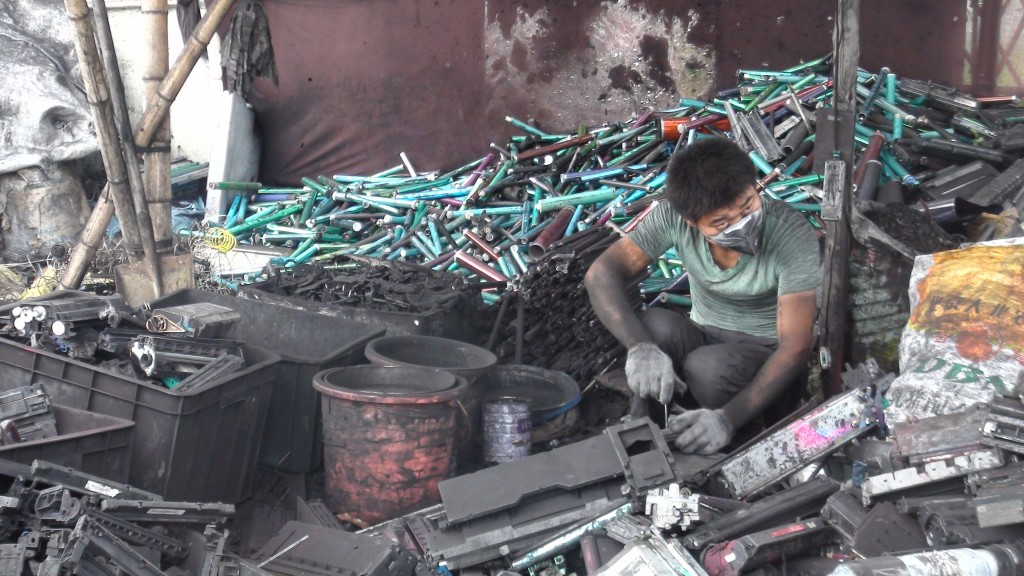 Considering that I work for Freshkills Park, the last place I wanted my old phone to end up was in the landfill. Electronic waste is a growing problem around the world and many gadgets are thrown away before they are actually unusable. Americans waste up to 2-3 million pounds of electronics a year and about 80% of electronic waste is dumped illegally in developing countries. The materials from dumped electronics can leach into the soil and water supplies. Electronics are openly burned in places like Agbogbloshie, Ghana and Guiyu, China to recover copper, aluminum, and brass. The black and toxic fumes emitted from burning e- waste are harmful to those that are left to deal with our unwanted waste and unwanted problem. I discovered this and other frightening facts about e-waste in a documentary entitled e-wasteland directed by David Fedele, available to watch online (on any of your web-enabled devices). Additionally, to make that new electronic requires energy, rare earths, precious, and other materials. The rare earth elements, which have electromagnetic properties that are useful in batteries, cell phones, and wind turbines, are difficult to extract. They are found in high concentrations in very few places. Rare earths are also very difficult to recycle. For example, Honda uses a process they call “molten salt electrolysis” to remove rare earth elements used in batteries to make new ones. That sounds scary to me. The problems caused by e-waste continue to worsen as life-spans of products decrease. This built-in obsolescence encourages consumers to upgrade devices after 18 months. Despite the reality of e-waste, its consequences are far less exposed than those of plastics. Recycling plastic has been required by law in New York City since 1989 and for this reason has become nearly second nature (as additional types of plastics are now recyclable and the day when plastic bags cost an extra few cents at the grocery store, or –gasp!—are made illegal, is a day that does not seem so far off). 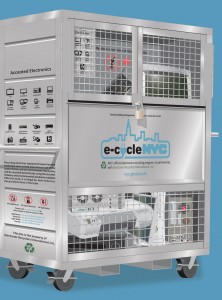 To mitigate the impact of electronic waste, New York State banned the disposal of electronics. As of January 1, 2015, all e-waste must be recycled and can no longer be discarded curbside. Over the past 15 years, New York City has been strengthening and broadening their recycling program and e-waste will be another milestone in reducing the city’s footprint. There will be multiple cost effective ways to recycle electronics in 2015. Buildings with 10 or more units will be provided with a special container as part of e-cycleNYC. The bins will be picked up by the NYC Department of Sanitation and brought to an e-cycling facility run by Electronics Recycling International where electronics will be reused or recycled. Large retail tech businesses (over 90 in the city) will also have buy back and recycling programs. To name a few, Staples, Best Buy, and Dell will take back unwanted electronics. The Lower East Side Ecology Center and the Department of Sanitation will also be hosting community electronics recycling events throughout the 5 boroughs where residents can bring their gadgets. The next event is scheduled for January 24th at the College of Staten Island. Another option is to mail your products to a recycler with the mail-back program. If your electronics still work you can participate in the NYC Stuff Exchange to donate or sell them for reuse. You can also return your e-waste to GrowNYC or the Lower East Side Ecology Center.

Previously, residents of New York City had a lower-than-state average electronics recycling rate. Now that there are much easier ways to recycle e-waste, New Yorkers will be able to make a more significant contribution to keeping those electronics out of landfills. But, what happens to these products once they are picked up for recycling? As it turns out, recycling isn’t as easy as it sounds. The City’s partner, Electronics Recycling International, is committed to recycling all materials in an environmentally responsible way and to ensuring that no electronics accepted go to landfills or are exported. According to Sanitation’s website, Electronics Recycling International has seven facilitates that “comply with the strictest industry and environmental standards available” The ERI website even provides YouTube videos that give an inside look into their recycling process. ERI shreds any cell phones that cannot be reused, which facilitates breaking the phones down into sortable plastics, low grade and high grade metals and glass. They use the same technique to recycle keyboards, tablets, and mice. 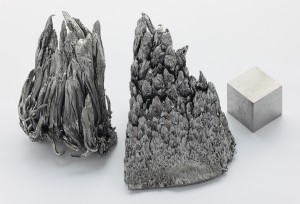 Electronics Recycling International provides some interesting statistics on their website. Of the mobile phones they collected in 2009, 38% were refurbished or reused and 62% were recycled. Also according to their site, recycling aluminum saves 95% of the energy used to make the material from scratch. However rare earth elements are a different story. Only 1% of the world’s rare earth elements used in electronics are recycled. Scandium is used in televisions and energy saving lamps. Yttrium is used in pulsed lasers and superconductors. Neodymium is used in headphones, microphones, and computer discs. These are just a few of the 17 rare earth elements and their uses. These elements are incredibly difficult to recycle. They are actually more difficult to recycle than they are to mine because they require aggressive solvents and very high temperature molten metal processing. After extensive searching, I was unable to uncover any information indicating that Electronics Recycling International recycles rare earths. However, they do recycle precious metals like silver, gold, beryllium, platinum, gallium, indium, and palladium.

All of this information was overwhelming and disheartening and I was more confused than ever. As an artist, maybe there was something more that I could do with my old phone. Many artists have tackled the culture of consumption and planned obsolescence in their work since the phrase was first popularized by industrial designer Brooks Stevens in the 1950s. More recently some artists have been provocatively addressing electronic waste using new mediums. One artist, Chu Yun, has done this in a stunning installation comprised of discarded and second hand electronics titled, Constellation 2006. The electronics are arranged in a pitch black room, in which only the gadgets’ blinking lights can be seen. They form a poetic and beautiful constellation of both light and sound. The humming of fans and even the gurgling of a pressure cooker can be heard. 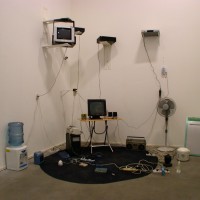 Constellation 2006 – lights on; photo by Latitudes-flikr is licensed under CC BY_NC_ND 2.0 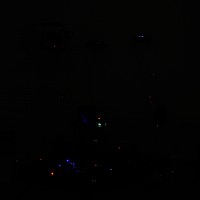 Constellation 2006 – lights off; Photo by Latitudes-flikr is licensed under CC BY_NC_ND 2.0

Yun’s work explores the communications between people and things and in Constellations 2006, Yun focuses on the signals our electronics are sending us. The indicator lights making up the stars signal to us how our gadget is functioning or not functioning. The printer is out of paper, or maybe an error has occurred. We are sent a signal that says “time for the newest version.” The installation itself is also a reference to our own lives, especially if we are city dwellers, representing the cramped arrangement of gadgets stuffed into small apartments. Philip Tinari’s description of the piece in Art Forum stated, “There is something eerie, something menacing, about the sheer number of these glowing, strangely animated devices; many of the flashing lights are the result of some error, some task undone – a paperless printer, an unread SMS.” Yun was born in China in 1977, which makes this project particularly poignant because China produces 90% of rare earths mined for electronics and also contains the largest e-waste dump in the world in Guiyu.

Constellation 2006 touches on habits that are very important to me. It reminds me to reuse and recycle anything and everything that I can; to only buy what I need to avoid the clutter of stress-inducing and unneeded electronics. Art can be a powerful reflection of our personal practices. However, the fact is we live in a commodity-driven market. New products are always more appealing than old. Upgrades are always desirable and the amount of electronics that become obsolete increase every year. Now signals sent from your electronics aren’t saying “I’m broken…fix me” but “replace me with a newer, better version of myself”. Barbara Kruger is another artist who critiques consumption, particularly in American culture. Her 1987 silkscreen Untitled 1 (I shop therefore I am), an image of which can be seen here, encapsulates the cycle of planned obsolescence. No matter how aware we are about our own consumption habits, our personal identity and comfort is intrinsically tied to and derived from material goods. E-waste isn’t going away, but hopefully this new recycling law will cause us to think more critically about how we reuse our electronics and how often we upgrade.

My personal research about how to best deal with my iPhone yielded some interesting results:

The verdict: Perhaps there’s no “best case scenario.” I ultimately traded in my phone to AT&T and upgraded since I was long overdue for one and I had never bought a new phone (this is my fourth phone as an adult—first, I had a “dumb” Nokia for 4 years, then adopted my father’s old iPhone 4, then the aforementioned hand-me-down 4s, both of which are sitting in my sock drawer. Remind me to e-cycle them). I don’t know if this was the right decision, but at least I know that AT&T handles their electronic waste responsibly. My new New Year’s resolution is to consume as few electronics as possible.

Image links for Constellation 2006: lights on; lights off