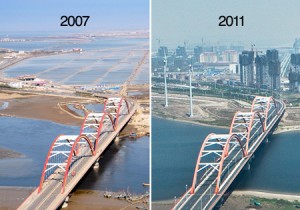 Located just a short drive outside of Beijing is a new city in development. Tianjin is one example of the several planned Eco-cities in China, where sustainable cities have become a relatively popular urban planning typology for formerly polluted areas. In the case of Tianjin, the one square mile reservoir was used to store a brine water solution containing Mercury and DDT, which damaged the area’s ecological functions. The Eco-city is being built on top of and surrounding the reservoir to be about half the size of Manhattan. The design meets the most current and stringent ecological practices in China, including cleaning up and restoring the wetlands and installing solar panels, wind turbines, and porous surfaces to reduce storm water runoff.

Tianjin was designed as a joint Singapore-China partnership comprising of the China Academy of Urban Planning and Design, the Tianjin Urban Planning and Design Institute, and the Singaporean Urban Redevelopment Authority. One of the principle design aspects of the Eco-city is the proximity between mixed use aspects of a city. There has been strict emphasis on designing the city to allow people to walk to work, or walk to public transportation, as opposed to depending on vehicle use. This has been done by segmenting the development of the city into “Eco-cells”, which are Commercial, Residential, and Ecological 400m x 400m blocks to maximize the ease of walking for daily tasks and comforts. Four of these cells make an Eco-neighborhood, and clusters of neighborhoods make up the four Eco-districts of Tianjin Eco-city surrounding the city’s Eco-core. An Eco-valley cuts through the city to connect the grid of four Eco-districts with trails, walk and bike ways, and a tram system. 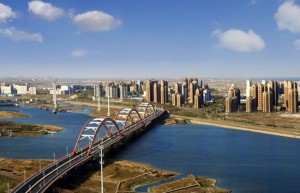 In the 21st century the urban environment has become the home to more than half of the global population. Currently a city of 20,000, Tianjin Eco-city has reached only about 5% of its built capacity of a projected population of 350,000. This might be due to the immense challenges in creating a city in its entirety and a staged evolution of services, goods and population. Very few businesses have opened in Tianjin Eco-city, making life challenging for those who have already moved there and an imbalanced appeal for future residents. Tianjin Eco-city is planned for completion in the mid 2020s and considered a model for sustainable development in China, Singapore, and around the world. Tianjin is an enormous undertaking in the field of urban land reclamation and provides the technologies for its anticipated citizens to use fewer resources and make a smaller environmental impact on an individual level.