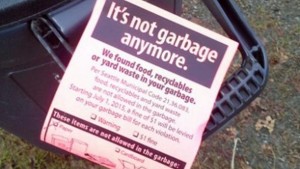 Seattle Public Utilities (SPU) has recently added a $1 fine for having more than 10% of a household’s trash composed of food waste. Passed on January 1, 2015, this comes as the next step in Seattle’s attempt to remove compostable materials from ending up in landfills, following the city’s previous 2005 ban on recyclable materials under a similar $1 fine program and the encouragement of residents to compost via SPU-provided compost bins.

The ban specifically states that “residents are prohibited from putting significant amounts of recyclable paper, cardboard, glass and plastic bottles and jars, aluminum and tin cans, as well as compostable food soiled pizza boxes, paper napkins, paper towels and food waste in their garbage containers.” Although the $1 fine does not take effect until June 1st, there have been numerous citations handed out, one source citing about 300 per day, during the test and implementation phase of this regulation. Hopefully this number will decrease as residents become used to the new restrictions, as what happened following the 2005 ban, which in total has only collected $2,000. 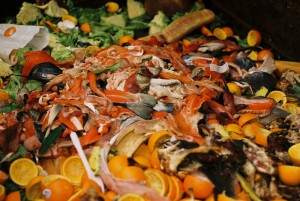 However, in some instances, anaerobic decomposition has already taken place and significant amounts of methane have been produced. At Freshkills Park,we have instead taken a proactive approach to reducing atmospheric methane. Throughout Freshkills Park you will see wellheads of the extensive LFG collection and containment system. These are signs of the landscape’s regenerative properties. Upon collection, the LFG is cleaned and processed to pipeline quality at an on–site LFG recovery plant. The LFG recovery process reduces gas emissions, non-methane organic compounds, and other hazardous pollutants by almost 100%, and supplies energy to homes on Staten Island.

Although we have systems in place now for dealing with the problem of landfill methane, it is also our responsibility to curtail the production of landfill methane by minimizing waste, namely food waste. The SPU’s ban on compostable materials in the garbage will significantly reduce the need for future LFG recovery plants and programs. While some Seattle residents take issue with this new restriction, and its $1 fine, complying actually saves money twice, first for not being charged for violating the ban, and secondly for not requiring municipal dollars to be spent on LFG recovery infrastructure.