From Behind the Mounds: Abandoned Ship Graveyard in Our Backyard

Distant cousins of the Titanic are lying offshore just south of Freshkills Park’s West Mound. According to some, the Arthur Kill Ship Graveyard is an historical and haunted maritime marvel, ranking among the top ten of boat graveyards and separately, of out-of-the-way NYC curiosities. Others, with perhaps a more pragmatic view, see the graveyard as a place with dangerous and unsafe hunks of metal filled with toxic substances that should be removed from the waterway. 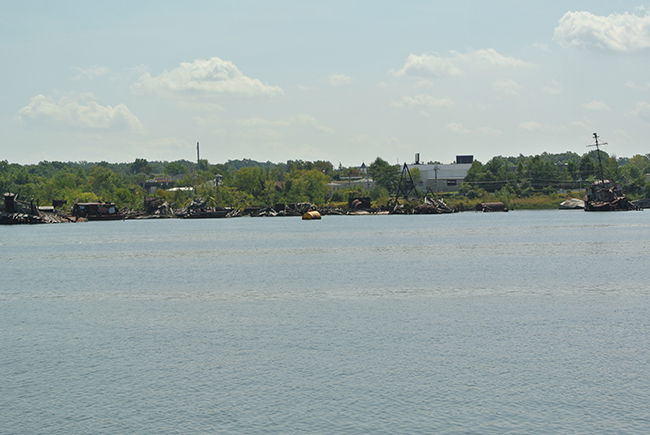 Some natural, but more often manmade activities are the forces behind boat graveyards. Blinding fog in San Francisco Bay and submerged reefs in the Red Sea have created their own local graveyards. Others, such as the Mauritania Bay boat graveyard in Nouadhibou are a function of illegal abandonment. Closely related but not necessarily the work of individual boat owners, is the conscious disposal of obsolete vessels, such as ill-fated early submarine models off the coast of England or wooden steamships in the Potomac River. And possibly the largest ghost fleet of all was created when Allied bombers sunk part of Japan’s imperial fleet during WWII. No matter the location, these boat graveyards share a visual language of mysterious abandonment- eerie rusted shapes floating on the sea floor, jutting above the water line or stranded on watery sandscapes.

How did the boat graveyard in the Arthur Kill come to pass? The graveyard was once the location of one of the largest marine scrap yards on the East Coast. After World War II, Witte Marine, a Staten Island scrap yard located on Arthur Kill Road in Rossville, began purchasing obsolete boats in order to salvage usable parts. But as time went on, the salvage operations were overwhelmed by the number of boats entering the scrap yard and the sheer quantity of boats in the waterway in turn led to illegal boat dumping. Now, the defunct and rotting steam tugs, ferries, and car floats are no longer worth the effort to salvage.

The former Witte Marine salvage operation has been taken over by Donjon Marine who offers ship breaking and marine recycling operations at the site. Interestingly, they note the graveyard as one of the hallmarks of their Staten Island location.

The boat graveyard has inspired many an intrepid city dweller to venture to Rossville to view and photograph the boats. A documentary has also been made about the boat yard, the Graves of Arthur Kill, was produced by Gary Kane and shot and researched by Gary Kane and Will Van Dorp. According to Kane and Van Dorp, a number of noteworthy vessels remain in the muck of the graveyard. These include the NYC Fire Department coal-burning fireboat, the Abram S. Hewitt that assisted in the rescue of survivors from the General Slocum. Over 1,000 people were killed when the General Slocum passenger ferry sunk in the East River in 1904. Another graveyard boat, the USS PC-1264, was discovered by Kane to be the first World War II submarine chaser with a predominately African American crew.

As the pictures show, Freshkills Park adventurers have also visited the graveyard on boat tours offered by Classic Harbor Lines. The boats evoke the past in their iconic silhouettes; make us wonder how hulks of steel became so disposable and inspire us to continue to transform a landfill into a park.