Bricks are one of the oldest and most commonly used materials for building on the planet, and until the early 20th century , the most commonly used building material in the United States. The simplicity of bricks is that they are small, which makes them easy to handle during the construction process and capable of forming very large and complex aggregate shapes. Their durability derives from their simple fabrication. Unfired bricks can be made by mixing clay and water, forming into a standard rectangular 8”x4”x2.5”, and leaving the blocks out to dry in the sun. The process of firing bricks removes water to make them significantly stronger. This has been practiced for over 2,000 years and European colonization brought brick making to America .

The Hudson Riverbed proved to be an excellent source of clay for manufacturing bricks, containing ideal minerals in the right ratios, and a brick making industry quickly took advantage by setting up in the Hudson River Valley and New York City. From as far North as Albany to as far South as Staten Island, the bricks that built the Northeast were manufactured in hundreds of small factories for different styles and types of bricks. The Richmond Brick Company in Green Ridge, Staten Island –now part of Eltingville– and the Kreischer Brick Manufacturing Company (Kreischer), in Kreischerville –now Charleston– were once one of the many flourishing brick producers in the Hudson area. 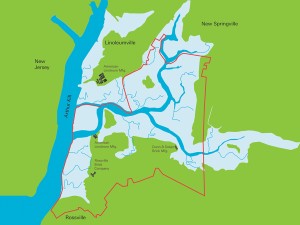 Kreischer was originally established in Manhattan, where they used Fire Clay from the Hudson, but soon larger deposits of Fire Clay were discovered in southwestern Staten Island along the Arthur Kill. With the availability of land, the Kreischer Brick Manufacturing Company moved and ultimately created the company town Kreischerville. Kreischerville was not the only company town in Staten Island to be named for the manufacturer of a building material. Based on the ecological resources of the area, Linoleumville was created around the western edge of the Fresh Kills in 1872 in the village of Long Neck, when Frederick Walton opened the first Linoleum factory in the United States, The American Linoleum Manufacturing Company. 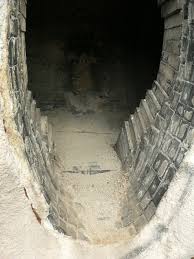 The bricks made by Kreischer were firebricks, “which are bricks made of Fire Clay, a refractory clay that can withstand temperatures over 3,000 F.” Kreischer manufactured firebricks and was one of the first and only firebrick producers in the United States. This deposit of Fire Clay is found in deeper waters that can be found in the Hudson River, off of Manhattan and Staten Island, and is remarkably different from most of the clay found in the waterways of New York harbor, despite their relative proximity. Firebricks were very popular in New York City at the time because fires were unfortunately quite frequent and deadly in the dense urban fabric of the nation’s largest city of that era.

The manufacturing of building materials within the city’s boundaries was more energy efficient than the contemporary practice of importing building materials from all over the world. Now that bricks are no longer the construction material of choice in North America, manufacturing jobs have been outsourced and significant energy is expended in transporting the materials across seas.