With a population of nearly 5.4 million people on less than 300 square miles of land, Singapore is the third densest country in the world. Once a part of Malaysia, it became an independent nation in 1965, and by doing so, the new island city-state began to increasingly rely on importing food to feed its people. Fast-forward nearly 50 years and Singapore produces only 7% of the vegetables that it consumes. The land scarcity that is posed by being on a small island is exacerbated by the fact that 10% of the nation is reserved as park and green space. 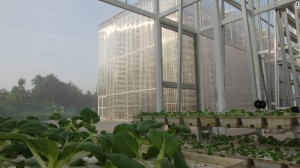 The government designated six Agro-technology Parks on the island with the goal of supporting high-yield, space-efficient farming methods suitable for the dense urban environment of Singapore, and as an example for Asia. One successful venture is Sky Greens, a company that engages in vertical farming by using triangle-shaped structures. The vertical farming structure uses low-carbon hydraulic device that rotates the growing areas 360-degrees allowing for sufficient sunlight to reach all plants. In addition, Sky Greens recycles the water it uses. This innovative approach to agriculture in Singapore makes for a highly-efficient, low-carbon method of food production that all mega-regions could  benefit from. 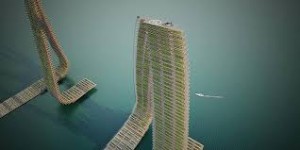 Responding to the national government’s call for innovation, Barcelona-based JAPA Architects is in the design phase of floating vertical farms that would surround the island nation on the open water. Furthermore, the proposed farms would be connected together and monitor purchase orders. Plantings would be responsive to the data, all in an effort towards zero-waste. The project hopes to gain the support of the government in this initial stage. Finding innovative ways to place high-yield food production projects in or near urban centers may be the way of the future as the price of transport, not to mention the cost to the environment through pollution, is on the rise.