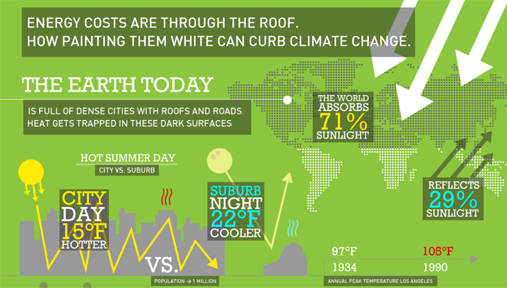 Amid all the talk about green roofs, it’s easy to forget about white roofs, also called cool roofs.  Cities are full of heat-trapping black surfaces, including roofs as well as roads, that intensify the urban heat island effect, raising temperatures up to 22°F warmer than in neighboring suburbs.  Painting roofs with solar-reflective white paint can reflect up to 90% of sunlight (compared to traditional black tar roofs, which reflect around 20%), keep temperatures lower, reduce production of smog and result in lower energy use to keep indoor spaces cool.  The White Roof Project, an environmental advocacy and action group, aims to reduce summer energy use in New York City by 10–30%.  The Project seeks help in identifying eligible buildings, volunteering roofs to be painted and/or labor to help in painting.  Most immediately, on August 20th and 21st, the Project will be  painting roofs of an entire block in the East Village, and they seek volunteer support.