What if the Olympics had come to Staten Island? 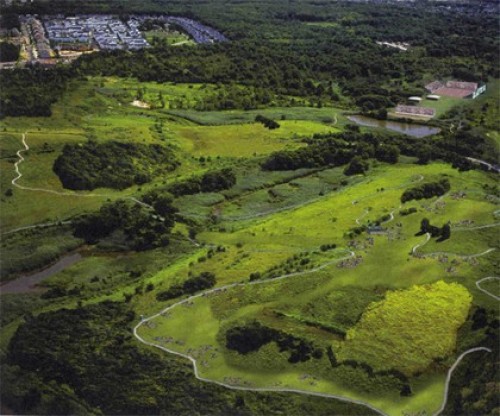 If you, like us, are currently immersed in the London 2012 Summer Olympics, it is fascinating to imagine if the games were instead taking place in our own backyard… More specifically at Freshkills Park!

As WNYC has reminded us, during New York City’s bid for the Olympics back in 2005, Staten Island and Freshkills Park were featured as a prominent site for large scale sporting events. The park itself would have hosted the Staten Island Olympic Cycling Center where the BMX and Mountain biking events would have taken place. While the rest of the borough was set to become home to the Greenbelt Equestrian Center, Fort Wadsworth Road Cycling Course Cycling and Richmond Olympic Softball Stadium. Thankfully both horseback riding and biking will eventually be offered on the island as part of the Freshkills Park master plan.

Despite losing out to London, New York City has still gone forward with several Olympics’ related infrastructure and venue plans. For instance, the proposed gymnastics arena, has been built instead as the Brooklyn Nets Stadium at Atlantic Yards in Brooklyn. WNYC has also produced a fascinating interactive feature which depicts all the proposed Olympic sites throughout the rest of the city.