The problem of large-scale food composting in NYC 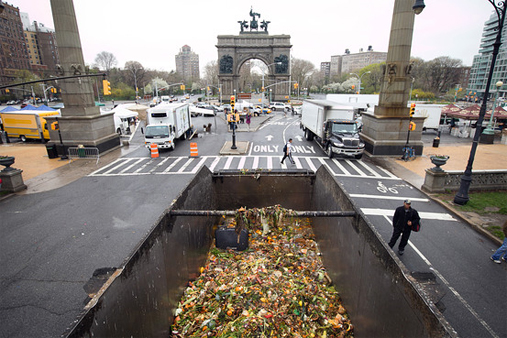 The Wall Street Journal reports on the state of large-scale composting initiatives in New York City.  Though tons of food waste are funneled into citywide collection streams, there is no place in the City to process all those scraps.

GrowNYC, the nonprofit that oversees the city’s 54 Greenmarkets, recently started collecting kitchen scraps at seven locations to be turned into nutrient-rich compost.  But organizers couldn’t find a spot in New York to handle the tens of thousands of pounds of coffee grounds, carrot tops, uneaten broccoli bits and other leftovers that decay into dirt.  Every week, the stuff is trucked about 125 miles south to the Wilmington [Delaware] Organic Recycling Center. A couple of months later, the company sells the compost.