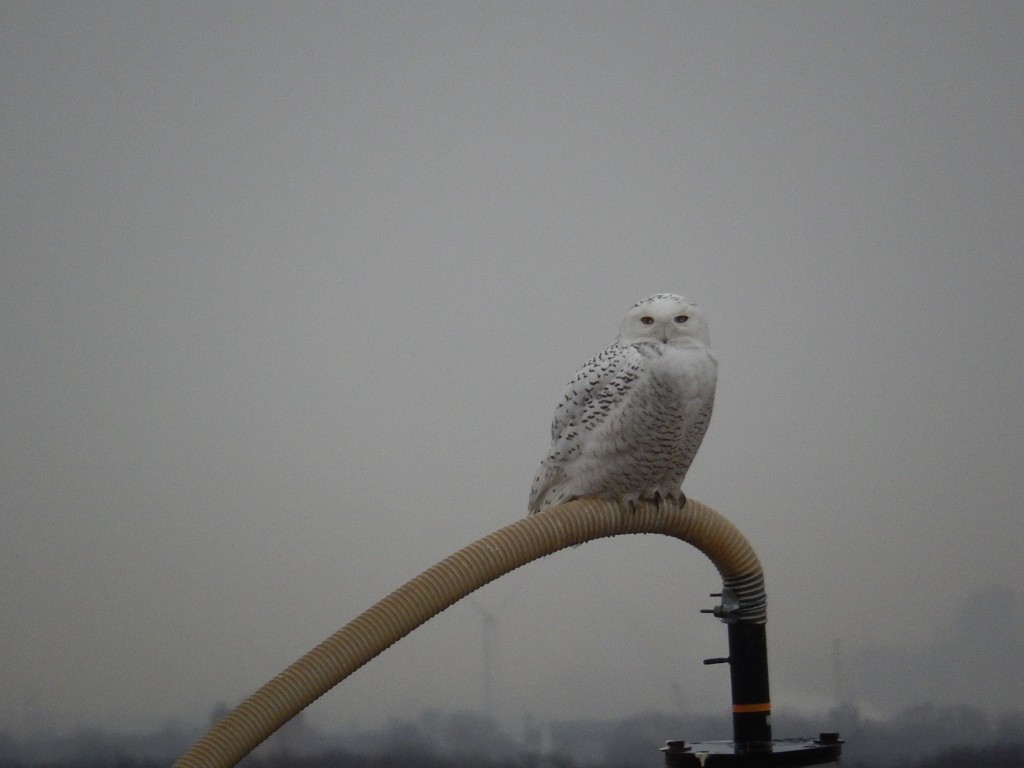 Snowy owl sighted on the north mound of Freshkills Park (the location of our annual Sneak Peak). Photo by NYC Director of Landfill Engineering Ted Nabavi

The snowy owl, a bird made increasingly famous by its role as Hedwig in the Harry Potter movies, was spotted at Freshkills Park last week. As its name suggests, the bird can be recognized by its snowy white color, though they have varied amounts of black and brown markings on their wings and chest. The females tend to have darker barring, while the males get whiter with age. The owl spotted at Freshkills has intermediate markings, so it is difficult to tell its sex, but because of the long white bib, our best guess is that it is an immature male. Interestingly for Harry Potter fans, despite Hedwig’s role as a female owl, she was actually portrayed by a male snowy owl in the films because they have whiter markings.

The snowy owl travels all the way from its summer breading spot in the treeless arctic tundra where it takes advantage of 24 hours of daylight to hunt small birds, waterfowl, and small mammals like the lemming. One snowy owl can consume over 1,600 lemmings a year; in fact, they are so dependent on lemming as a food source in the arctic that in years when the lemming population booms, the snowy owl is able to hatch more chicks. Unlike most owls, the snowy hunts during the day in large open areas like fields or shorelines. For a vantage point in these wide open spaces, the owls often find a conspicuous perch like a fence post, or in the case of the one spotted at Freshkills, a landfill gas pipe where DSNY Director of Landfill Engineering Ted Nabavi photographed him.

Snowy owls are only spotted in the winter in the Northern United States, but there have been a number of sightings in the area recently. If you’d like to try to spot these magnificent owls, you can try Great Kills Park (on the south west shore of Staten Island), Jamaica Bay Park (in Queens), or check ebird for the latest sightings near you. Happy birding!

Information via All About Birds