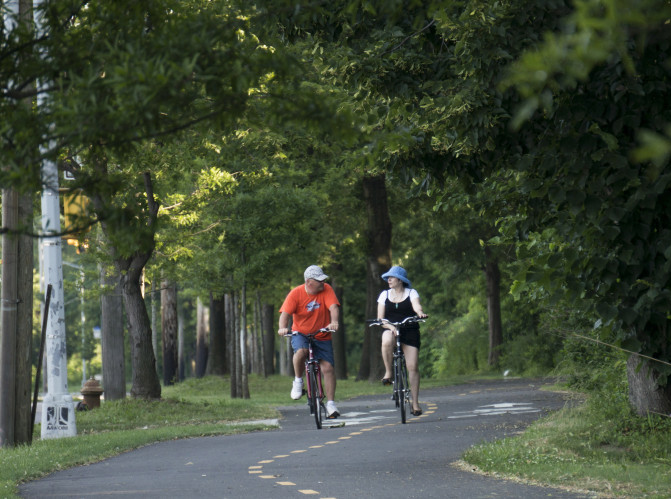 The New Springville Greenway on Richmond Avenue is a 3.2-mile bike and pedestrian path that runs along the eastern edge of Freshkills Park. Completed in 2015, it’s the latest section of Freshkills to open as the 2,200-acre park is built in phases. This summer, Freshkills Park interns Yating Ru and Saumitra Sinha from Cornell University conducted an observational survey to better understand how the Greenway is being used by the surrounding neighborhoods.

Conducting the survey required morning counts from 8:00 am to 12:00 pm and evening counts from 4:00 pm to 8:00 pm as well as careful observation of bicyclists, walkers, joggers, baby-strollers and rollerbladers on the Greenway.

After the data were collected, Yating and Saumitra conducted a series of analytical and statistical tests to try to unravel the trends and understand the usage. Comparisons of morning and evening use may be skewed since the morning counting likely began after peak morning use started. Nevertheless, their work confirms that the community is embracing the expanded transportation and recreation opportunities provided by the New Springville Greenway.

So what are some of the findings of the survey? Yating and Saumitra found some expected trends as well as a few unexpected ones.

When and How People are Using the Greenway

Who is Using the Greenway

Yating and Saumitra were sometimes surprised by people’s creativity in using the New Springville Greenway. They saw groups of seniors on a bike tour and a senior who flashed by on rollerblades. Sometimes they were also touched by sweet moments: a family taking a walk together after a long day’s work, kids riding bikes followed by their parents walking a dog, and a senior couple smiling at each other when cycling.

This observational survey was the first of more surveys to come.  Freshkills Park is indebted to Yating and Saumitra for being the first to develop and implement a Greenway usage survey and will continue to build on their great work.