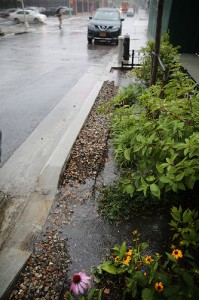 Well known to city dwellers, the urban landscape is dominated by impervious hard surfaces that require manmade sewage infrastructure to handle all rainfall and storm water management. In normally functioning environments, soil and vegetation absorbs this water and retains it to a certain capacity before runoff is generated. This runoff follows gravity until reaching a retention basin or swale. Modern cities have covered these natural sponges and replaced them with sewer systems to hold and move the surface water runoff out to the open bodies of water: rivers, lakes, and the ocean. Unfortunately, it has only recently become clear that this is a problematic method of water control by flooding during natural disasters like Super Storm Sandy and Hurricane Katrina and the pollution runoff affecting our water systems globally.

First outlined in 1987 under the Water Quality Act’s Nonpoint Source Pollution management system, pollutants and litter carried from city streets out to open bodies of water significantly impacts the health of those marine systems. Philadelphia first started using bioswales in the late 1980s to comply with the new WQA regulations, and the practice is becoming widespread throughout the country. New York City first launched the program in 2010 as a pilot project and currently has 250 curbside gardens that take the burden off water management system. Plans to install over 2,000 more were recently announced in anticipation of future high flood risk events that often lead to the over flow bypassing the sewage treatment facilities and flowing straight into open bodies of water. For more information on sewage systems, check out this video by the Center for Urban Pedagogy.

Although there are no “Priority Combined Sewer Watersheds,” or any Curbside Gardens proposed in Staten Island, the joint NYC Department of Environmental Protection and NYC Parks and Recreation plan for “Green Infrastructure” development has planned to increase the number of Curbside Gardens from 250 to 750 by the end of next year –an important step in keeping the city’s waterways clean and helping to make the most vulnerable areas more resilient to storm water flooding.

It is projected that these Curbside Gardens can manage daily between 1,300 and 3,000 gallons of water each, and when every proposed garden is completed, 200 million gallons in total will be diverted from the sewer system. This falls short of the 1.4 billion gallons of sewage that NYC DEP treats daily, but it does separate rainwater and other runoff from entering the sewage treatment stream and helps prevent overflow situations from happening. Each of these Curbside Gardens costs around $20-25,000 which is significantly less expensive than increasing the capacity of the city’s current water treatment and storm water storage infrastructure. 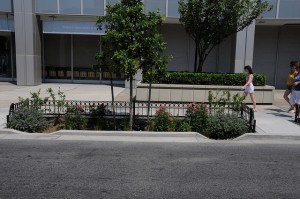 There is another benefit of Curbside Garden installation… they’re an aesthetic addition to the urban streetscape!