From Behind the Mounds: New York City Department of Parks and Recreation’s Capital Project Tracker 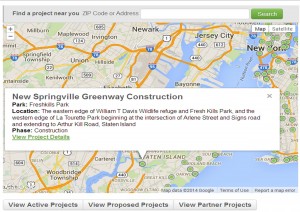 On Friday October 24, 2014 New York City Department of Parks and Recreation launched the Capital Project Tracker, an interactive map of all active Parks Department projects. There currently are over 400 active projects on the Tracker, with a timeline of each project and dedicated sections including Design, Procurement, and Construction phases. The Tracker also includes the project funding sources and links to more information, click here to explore for yourself.

The Capital Project Tracker is just one small part of the initiative and report, NYC Parks: Framework for an Equitable Future, developed under the de Blasio administration and NYC Parks Commissioner Mitchell J. Silver to reinvest in the city’s open space and bring a socially, environmentally, and economically thriving parks system to the whole city.

The Framework for an Equitable Future is designed to reverse the adverse effects of lack of access to green space by initially investing $130 million into 35 of the city’s parks, as Capital Investments, located in identified neighborhoods. These parks are located in the Community Parks Initiative Zones, which are described as just the first of nine steps in the Framework for an Equitable Future, and are featured on the Capital Project Tracker.

Freshkills Park is a NYC Parks Capital Project and tracked because it affects the community of Staten Island and is considered a Key Upcoming Project. We can see this in Freshkills Park with the construction of the New Springville Greenway which is set to be complete by June of 2015, and one of five current projects at the Freshkills Park site.

The Capital Project Tracker is a great new way for the people of New York City to see how the Department of Parks and Recreation is engaged in communities by providing accurate and up to date information about the improvements in green space. It does this by creating an easy and accessible method for determining which projects are taking place in your neighborhood and how, when, and why those projects will impact our lives as New Yorkers.