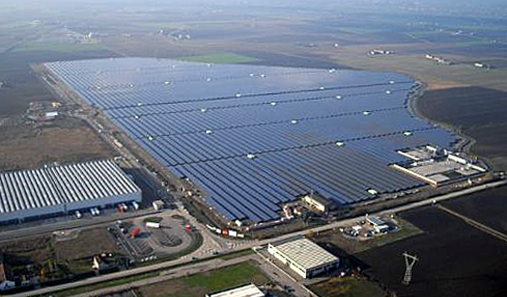 The small town of Rovigo, Italy is now home to the largest single-site solar photovoltaic plant in Europe, developed by US-based SunEdison. The 210-acre facility is capable of generating 70 Megawatts of energy—enough to power over 17,000 homes—which is tantamount to preventing over 40,000 tons of carbon dioxide from being released into the atmosphere annually.  The solar farm was built by Isolux Corsan and connected to the electric grid in November 2010, a mere eight months after being permitted by the Italian government, who offered the project support at all levels.

In our own backyard, the New York Power Authority is aiming to implement up to 100 MW of solar PV capacity by 2015—the largest solar initiative in the history of New York State. The venture is to be carried out across the state at sites including schools, municipal facilities and government buildings.  Proposals from 43 solar developers are currently being evaluated.

(Via TreeHugger and Cnet News)