Graphic interventions on the “Wall of Sormano” 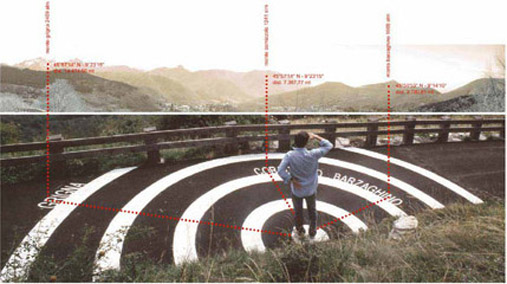 The incredibly steep slope of northern Italy’s Muro di Sormano (“Wall of Sormano”, a mountain road perceived as a “wall” by many determined cyclists) was a part of the course for the Giro di Lombardia from 1960-62, and is considered to be one of the most difficult cycling tracks in the world. Following these famed races, the road was closed for many years and fell into disrepair. In 2006, designers working to resurrect the site devised a clever way to integrate the site’s cultural history with the course itself.

Now re-opened as a public space for recreation, the Muro di Sormano is painted with striking stencils of local plants, viewing spots that contextualize the surrounding mountain peaks, and altitude markers to measure the climb. In addition, large-printed quotations from Italian cyclists inspire the site’s new users to push on despite the grueling topography. These efforts to graphically engage visitors effectively redevelops “the wall” into a narrative for the changing landscape.