Think about bugs; now think about billions of insects concentrated in one facility. Some might get queasy at this thought; however, that is exactly what is happening at a new 90,000 square foot facility near South Africa’s Capetown. Typical production of protein requires a great deal of water, land and capital. All three are experiencing decreasing supplies as climate change alters rainfall patterns and farmers face a high overhead for feed. For instance, one pound of beef uses nearly 1800 gallons of water, which includes water needed for feed, drinking etc…when you think about it, most everything we eat is water intensive. To counteract this demand, an innovative company is partnering with an Australian agricultural investment firm to create the world’s first insect-based feed company. The new location is set to produce 23.5 metric tons of insect-based protein feed and 50 tons of fertilizer-per day. This is a huge shift in the approach to industrial-scale agriculture, a sector that is often criticized for being wasteful and having extraordinarily high consumptive-water-use rates.

You may be wondering how a bunch of insects are somehow going to be turned into animal feed? The company explains that common house flies, black solider flies and blowflies will be bred for animal consumption in addition to producing nutrient rich fertilizer. This company has devised a self-sustaining method of reproducing the flies needed to produce fertilizer, the only additive: organic waste. In New York City alone, organic waste accounts for over 30% of what we throw out to the curb, but the benefits of this are not just limited to a waste diversion (keeping out trash from landfills). 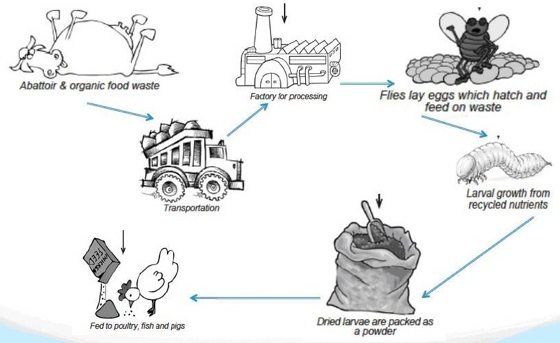 Having a single-input system of production-especially in industrial agriculture is a much welcomed addition to this sector that known for its use of chemical-based fertilizers. This approach to fertilization has been linked to huge swaths of the ocean unable to support life, or dead zones as runoff from farms finds its way to streams and ultimately the ocean. Dead Zones are created when nitrate and phosphorous rich water reaches the ocean by as spring and summer rains that flush these chemicals from the farms that utilize them. Eventually, these fertilizers make their way to the open ocean where they starve the water of oxygen, creating a phenomena called hypoxia. These waters are unable to support sea life, shrimp, fish and any other life in the water die as huge algae blooms take hold and consume most of the available oxygen. This year it is expected that the algae bloom will reach the largest size ever recorded-nearly the size of the state of New Jersey!

By opting for natural, rather than synthetic fertilizers, especially those that use little to no water in their creation, could have several benefits: the reduction of both consumptive water use for agriculture and the size of dead zones on the open ocean. Economically, this would assist the fishermen/women whose livelihood depends on what they can catch and urban populations that rely on water for everything from drinking to computer chip manufacturing. In a world faced with an uncertain climate, rapidly diminishing stocks of wild seafood and potable water sources, insects may hold the promise of a sustainable future.