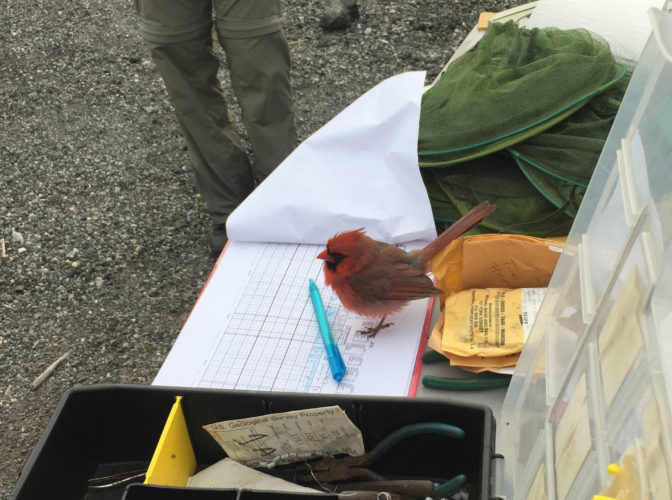 A cardinal after being banded at the park.

This summer, researchers from the College of Staten Island operated the first bird banding station at Freshkills Park. The banding station was part of The Institute for Bird Populations’ MAPS: Monitoring Avian Productivity and Survivorship program, which has been in existence since 1989. Today over 1,200 stations exist throughout the United States and Canada.

Researchers would arrive at the park at 5 a.m. to set up the nets, as birds are very active during the dawn hours. Netting and banding would then proceed for four hours. Before being released, the birds were banded with little ID tags. This means that when and if birds are later recaptured, researchers will be able to learn information about their productivity and survival. If the birds are recaptured in a different region from where they were originally tagged, researchers can also learn about their movement patterns.

In addition to banding birds, the researchers recorded important demographic data, such as age, sex, and whether the individual had a “brood patch,” or a patch on the bird’s stomach used for incubating eggs that is free of feathers and extra warm. A brood patch is a good indicator of whether or not the bird has a nest in the area. This kind of information gives far more information than simply counting species numbers, and it’s integral to determining the factors that determine population growth for certain birds.

This season, the researchers, led by Dr. Richard Veit and Dr. Lisa Manne, banded over 20 species of birds, including orchard orioles, hairy woodpeckers, and yellow warblers. The project also served to educate and train students in both bird identification and demographic recording as well as banding techniques. A U.S. Federal Bird Banding and Marking Permit is required to band birds in the United States, and to receive one an individual must first receive training from other qualified banders. For students who one day may wish to acquire their own banding permit, assisting on this project may have served as their first step toward qualifying.

In addition to adding to large scale data sets that increase our knowledge and understanding of bird productivity, it’s pretty cool that there are now a bunch of birds flying around with bands identifying them as having been at Freshkills Park. The ongoing project will take place at the park again next year.