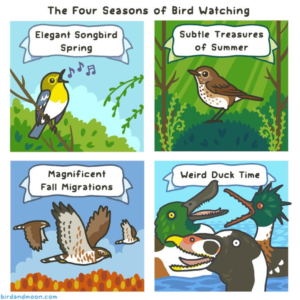 As the colorful warblers, flycatchers, and tanagers move south to escape the blustery winters of the northeast, the first few weeks of fall bring a rush of cool air and changing leaves. However, this change of season also brings in some very unusual waterfowl to our area. For many bird-watchers, this is fondly and casually described as “Weird Duck Time.” Many of these ducks spend their summers in the meadows of northern Canada, but make their way south to spend their winters.

Ducks are typically distinguished by their feeding behaviors, being classified as either dabblers or divers. Dabblers “up-end” themselves (sticking the top-half of their body into the water) to feed on invertebrates, plankton and vegetation growing in shallow waters. Divers submerge themselves entirely beneath the water to capture their food. The bills of divers tend to be long, narrow and serrated like a knife, to help capture fast moving prey. The legs of dabblers appear in the middle of their body, which helps them when walking on land. Divers generally have their legs closer towards their tail, which helps them reach maximum speed while swimming under the water.

Many species of ducks are sexually dimorphic, meaning that males and females look different from one another. Males are often more ornamental in coloring, boasting brightly colored feathers or fantastically colored bills to attract females. Females tend to be more earth-toned in coloration. While the females may be less ornate, this serves a very important job; to camouflage themselves better while incubating their eggs.

Freshkills Park hosts a variety of waterfowl throughout the year. In fact, 14 different species of ducks spend at least a portion of the year here! Late fall and winter is particularly exciting; the year-round resident ducks such as Mallards and Wood Ducks remain, and migratory species such as Northern Pintail join them. Here are five common duck species that can be found at Freshkills Park during Weird Duck Season!

Buffleheads are the smallest diving duck of North America. They are often seen bobbing at the surface of the water, then abruptly diving to catch aquatic invertebrates. They eat insects, snails and small crustaceans. The name Bufflehead is in reference to the shape and disproportionately large head of the male duck compared to its body, resembling that of a buffalo. In the winter, Buffleheads are usually found in large numbers on the ocean, but are also found on large ponds, lakes, and rivers. 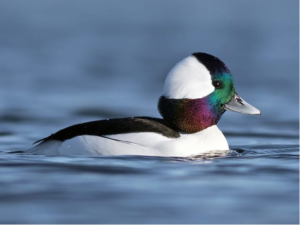 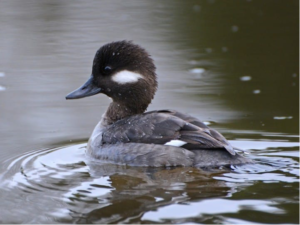 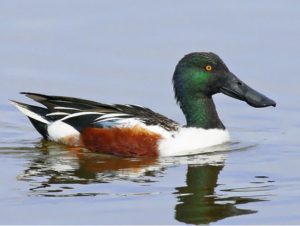 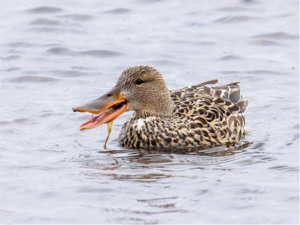 mall comb-like projections that help them capture and filter out small crustaceans, aquatic vegetation, and plankton from the water. Sometimes, groups of Northern Shovelers will forage together, swimming uniformly in a circular motion, helping to stir up food to the surface.

Hooded Mergansers are diving ducks that are perhaps best known for their distinctive crest. They are very good swimmers built for speed, and for capturing fast moving prey. They have a serrated bill, helping them to grab fish, one of their favorite food items. In the winter, Hooded Mergansers can be found in brackish waterways, forested wetlands, and small ponds. 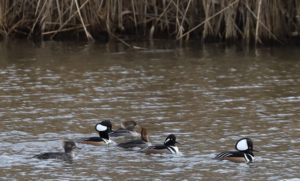 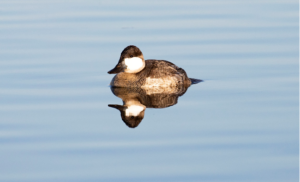 Ruddy Ducks are considered divers, and feed on insects and crustaceans. When not actively foraging, Ruddy Ducks typically tuck their bill into their back feathers and free-float atop the water. The male’s bill turns bright blue in the winter, prior to their breeding season. Male Ruddy Ducks have animated courtship displays, where they inflate their neck pouch and blow bubbles into the water. You can find Ruddy ducks in large flocks on freshwater wetlands, lakes and tidal estuaries.

Known for their elegance, Northern Pintails are large dabbling ducks found in a variety of inland and coastal habitats including the brackish waters at Freshkills Park. They are often observed “up-ending” while feeding on aquatic vegetation and small crustaceans. Northern Pintails migrate earlier than most species in North America, and are one of the first species of migratory ducks to arrive at Freshkills Park in the fall, and the first to leave in the spring. 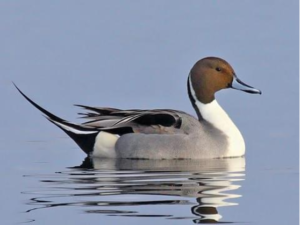 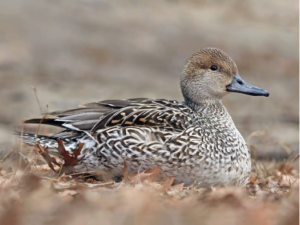 December 14th marked the start of Audubon Society’s annual Christmas Bird count.  Now in it’s 121st year, you can contribute to a century of citizen science by signing up for a count near you.  What winter birds are you excited to count?  Share your birding pics and tag us on social media @FreshkillsPark.