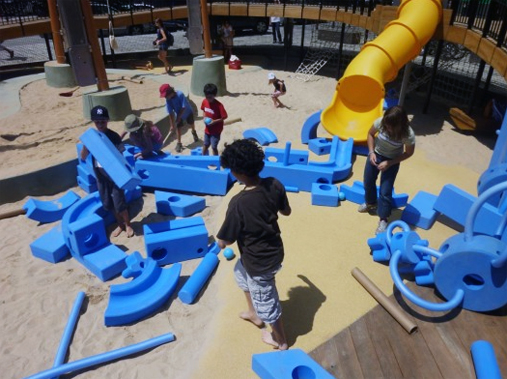 The Imagination Playground opened today in the South Street Seaport area of Lower Manhattan. It’s the first permanent site where children can interact with the loose parts—a collection of moveable, stackable, manipulable pieces that can also couple with sand and moving water—that have been designed and developed by architect David Rockwell, who also designed the playground. A mobile version has been touring New York City’s parks for the last year. The New York Times City Room Blog describes the new space:

Instead of monkey bars and jungle gyms, there are fountains with canals of cascading water that can be dammed in infinite ways, or transformed into a network of rivers. There is an engaging set of lifts and pulleys. Play is proctored and interaction fostered by a staff of city workers trained as ‘play associates.’

Loose parts and sandboxes, as non-revolutionary as they may seem, are atypical in New York City playgrounds. Their maintenance and replacement can be costly and frequent. Funding a play associate could be a good way to monitor use and to ensure the integrity of the playground; we’ll be following the operation of this playground with interest.

The project’s $4.3 millon construction cost and $3 million water main relocation was supported by federal monies raised by the Lower Manhattan Development Corporation. Rockwell also raised funds for an endowment to pay for the site’s ongoing maintenance.