Forty percent of U.S. food ends up in a landfill 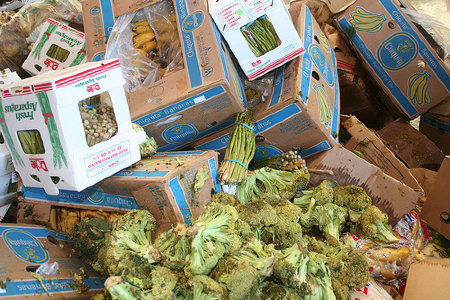 A new study released this week by the Natural Resources Defense Council found that 40 percent of food produced in the United States ends up in the trash, making food waste the single largest portion of trash in our landfills. While the amount of food thrown away has increased by 50 percent since the 1970s, one in six Americans struggles to pay for food today.

And then there’s the energy used in the production, transport, processing, and disposal of the food, only for it to be thrown away. According to a study commissioned by the Environmental Working Group, nearly 80 percent of greenhouse gas emissions come from producing and processing food. At Freshkills Park, buried food waste is part of the decomposing organic material that produces Landfill Gas (LFG), a byproduct of anaerobic decomposition which is collected and processed to extract methane. The methane produced at Freshkills Park is then sold for use in providing energy to local homes on Staten Island. However, across much of the U.S., LFG- a mix of methane, carbon dioxide, and other contaminants- ends up in the atmosphere and is an important contributor to greenhouse gas emissions.

What can be done? There are many ways to prevent food from ending up in the garbage. According to NPR, new innovations in how food waste is dealt with are being developed to facilitate collaboration and changes in habits at many different scales, from food consumers to food retailers and food producers. The Environmental Protection Agency also provides a useful webpage with resources on donating food to food banks and food rescue programs.

If food must be thrown out, one alternative to the landfill is the compost bin. The New York City Compost Project provides low cost compost bins, education, and information on community-based composting projects and will be doing composting demonstrations at the Sneak Peak event at Freshkills Park on Sunday, September 23rd. In New York City, a growing number of  local Greenmarkets are now also collecting food scraps for compost to use in local gardening projects and urban farms.

(via Good and NPR)