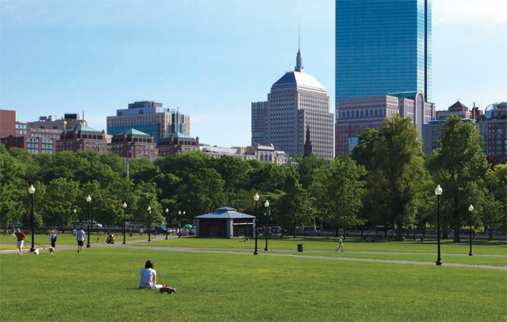 Boston Common, the oldest urban park of any major city in the nation

The Trust for Public Land recently published its annual report on urban parkland in the United States. The 2011 City Park Facts lists information for the 100 largest U.S. cities, serving as the nation’s most complete database of park facts.

The report includes data on urban park acreage, spending, staffing, and facilities. breaking down each city in categories such as “Acres of Parkland as Percentage of City Area” and “Total Spending on Parks and Recreation per Resident”. The report also provides snapshot “Top Tens” for the number of certain amenities per capita, like off-leash dog parks and basketball hoops.

Central Park easily maintains its title as the most visited city park in the country, with 35 million visitors per year. Battery Park, established in 1686, is the 7th oldest park in the country. New York City spends $158 per resident on its parks; Washington D.C., the biggest spender, allocates $375 per resident. NYC does not make any of the amenities top ten lists.