In a Bird Box at Freshkills Park

Three years ago, Professor Mark Hauber from Hunter College hung bird boxes in select locations at Freshkills Park and he has since been monitoring them on an annual basis. He is tracking the growth in the bird population as an indicator of the rejuvenation of the park. Not all of the original bird boxes have survived, but a peek inside the 39 boxes that remain at the park revealed much to this new birdwatcher. 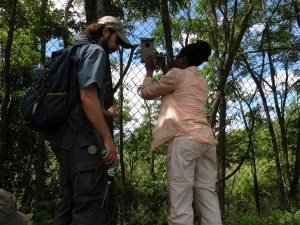 The boxes, typically hung on chain link fence, are inhabited by tree swallows and wrens as well as the occasional rodent. Male birds “mark” their boxes to prevent other males from using them. The males collect small sticks in the box to fill it from a third to almost completely full. Hence when the boxes are first opened, the view is often of a wall of sticks, instead of a nest. Sometimes you can also spot feathers intertwined with the sticks (Canadian geese feathers seem to be a favorite) which can be an indicator that the box holds an active nest because the feathers help insulate the eggs.

Once the box is opened, and it is confirmed that the occupant is not a rodent, very careful hands use a small mirror on a stick to look at the back of the birdbox (think of a large dentist’s mirror). The mirror allows the researcher to look behind the sticks to see if there is a nest and whether it contains eggs or with luck, hatchlings. It’s harder than it sounds- in fact one of Dr. Hauber’s assistants checked a box and concluded it was empty only to have Dr. Hauber reach in and find eggs! 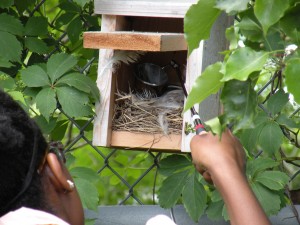 After inspection with the mirror, and if eggs or hatchlings are thought to be present, Dr. Hauber or one of his assistants gently reaches into the box to pick up the items and share them with those on the expedition. Although the mother bird typically fled the box at our approach, especially because the researchers warn the birds by knocking on the box before they open it, sometimes the parents hovered and watched us. I projected a parent’s anxiety and fear onto the hovering birds but it may have merely been curiosity! Dr. Hauber also explained that stories to the contrary about human scent, the parent birds will reenter the box and reengage with the eggs and/or hatchlings in spite of any lingering human scent. Nevertheless, we were cautioned not to try to touch eggs or hatchlings on our own, it can be very disruptive to the babies and the parents. 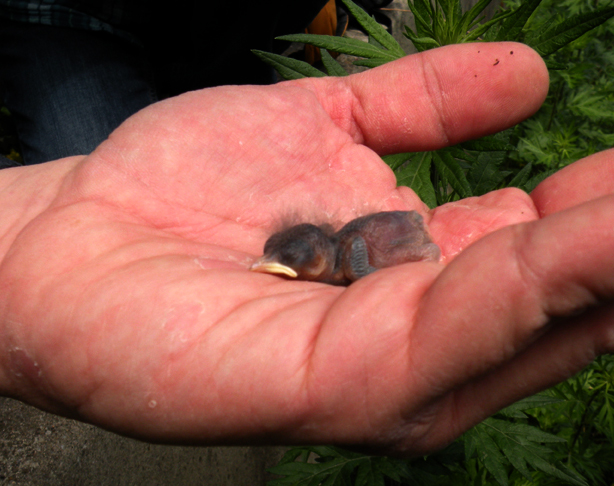 Perhaps the most astonishing sight of all was that of the hatchlings up close- they are tiny- maybe an inch and a half long and all skin with only the slightest bit of down on their heads. Their eyes are closed, a tiny beak protrudes from their head and with their bald wings and folded legs, they are quite helpless. But even so, mother nature has endowed them with features that are well-suited to early life in a nest. If you look very closely at the picture of the hatchling, you will see a small yellow bulge in back. That is the “fecal sack,” which when expunged by the hatchling, can be removed intact by the parent bird, thus preventing any fecal matter from accumulating in the nest. A highly hygienic trick especially for such close quarters!

The final count from the day of bird box checking was as follows: